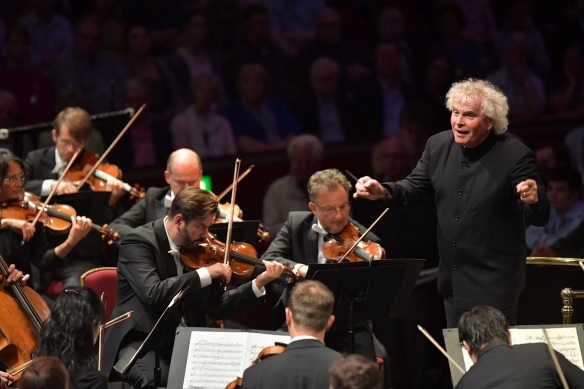 You can watch this Prom on the BBC iPlayer

Mahler is the composer Sir Simon Rattle was born to conduct. That may sound like a grandiose statement, but for four decades now Rattle has been immersed in the composer’s music. Now he is at the top of the musical pile, on the verge of taking over the London Symphony Orchestra job next year, and this Prom was another opportunity to appraise the results of his tenure – not always easy – with the Berlin Philharmonic.

The results were little short of spectacular. To see the Berlin Philharmonic in the flesh is to witness the pinnacle of orchestral playing, especially when the woodwind principals are soloists in their own right – flautist Emmanuel Pahud, clarinetist Andreas Ottensamer and oboist Albrecht Mayer to name but three.

All were integral to a performance of Mahler’s Symphony no.7 that will live long in the memory. The work is often regarded as problematic, and sprawling, but in this performance Rattle and his charges brought compelling characterisation to the central movements in particular.

In the right performance the work still sounds remarkably modern given its 1913 composition date, using sonorities composers of today would struggle to create. Mahler writes two Nachtmusik movements, placed two and four in the five-movement structure, and here it felt as though we had stepped unwittingly into a magical garden in the heat of summer.

The night time flying bodies were out in force, realised through music that was at turns macabre, enchanting or just downright weird – allusions to the Habañera could be detected in the second movement. The mandolin and guitar in the fourth movement were odd in the extreme but also gave prime examples of Mahler’s amazing scoring, able to reduce a symphony orchestra of 110 from ear splitting climaxes to near-silent conversation in the blink of an eye.

Horn player Stefan Dohr was rightly cheered for his contribution to the first Nachtmusik, a recurring folk-like motif that set the outdoor tone beautifully. The first movement was an invigorating Alpine march, with warmer moments when the violins swept into the second main theme, and a colder, steely approach when the march took a greater hold. The scherzo, placed third, had no such let-up, and was a macabre dance into the darker areas of the mind.

This undercurrent followed the music to the end, for although the last movement was largely jubilant, and let timpanist Rainer Seegers off the hook with a riotous opening solo, it frequently looked into the unknown. Nowhere was this more evident than the approach to the end, Rattle making sure the brief but significant pause and harmonic detour was signposted.

Rattle is often accused of micro managing Mahler but here his interventions were both instinctive and stylish, followed to a letter by his superb orchestra. The audience hung on their every note, and although some of Mahler’s phrases and turns of foot are difficult to follow and comprehend, this account was as strong and sweeping as any.

By way of a palette cleanser, Rattle and some of his charges began with the 1965 piece Éclat by Pierre Boulez. This was an exercise in texture and resonance, Boulez using instruments primarily for their reverberant qualities. It was indeed a vibrant set of sounds, but they were occasionally difficult to connect – purely because of the anticipation of the Mahler to follow and the exuberance of the crowd. We were there to see a memorable performance – and Rattle duly delivered. Berlin’s loss will most definitely be London’s gain.