The Oberon Symphony Orchestra continued its season with this pertinent juxtaposition of Mozart and Mahler. The second half was devoted to the latter composer’s Fourth Symphony, in a performance that brought out a great deal of its ethereal rapture as also its oblique irony.

Opting for a steady though never sluggish underlying tempo for the first movement, Samuel Draper (below) made much of this music’s constant eliding between affection and agitation; the latter quality to the fore during a development that built stealthily and incrementally toward its (in context) visceral climax, with the ensuing textural fragmentation then resumption of the main theme in media res tellingly done. Nor was there any lack of eloquence in the Oberon strings’ response to the blissful final pages, before a heady accelerando into the resolute closing bars.

The second movement upped the ironic ante accordingly. Draper knitted together its sardonic scherzo and ruminative trio sections with no mean subtlety, while also emphasizing the aura of malevolence – this latter abetted by leader Matt Bain’s adept switching between violins as tuned normally as well as a tone higher. No less pleasing was Draper’s unaffected approach to portamento – an expressive device only belatedly reintroduced but that, when handled so unobtrusively, adds greatly to the cohesion of this music whatever its emotional disjuncture.

If the adagio was marginally less well integrated in terms of its overall follow-through, there was little doubt as to the poise of Draper’s conception across these variations on contrasted themes in what is arguably Mahler’s most Beethovenian movement. If the slowly emerging angst seemed overtly reined-in, moreover, the breath-taking sense of the coda opening-out onto new expressive vistas was palpably conveyed; the music that follows evincing a highly personal take on the essence of serenity which was – and has remained – unique to Mahler.

Following on (rightly) attacca, the finale needs to lighten the prevailing mood without that unworldliness seeming trivial. In which respect this account succeeded admirably, whatever the occasional failings in ensemble. It helped to have a soloist who, in Anousheh Bromfield, had the measure of the vocal writing’s pert insouciance and often edgy naivete. The lengthy orchestral introduction into the final verse had an ideal lilting motion, with the closing bars not so much tapering-off into nothingness as making toward a point of unwavering stillness. 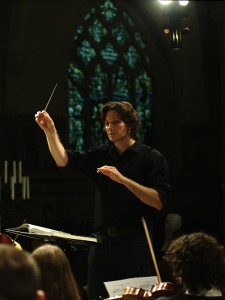 Before the interval, Bromfield joined the orchestra for a selection of Mozart concert arias     as complementary as it was unexpected. There was no want of technical finesse in Vorrei spiegarvi, oh Dio! or Ah sie in ciel, benigne stele, though the greatest delights came with a rare outing for Nehmt meinen Dank which incidentally pointed up the unfettered melodic appeal common to Mozart’s settings in German. In each of these pieces, moreover, Draper and his players provided accompaniment of a poise and elegance necessary for this music.

Overall, another fine showing for the Oberon Symphony Orchestra – which returns on April 29th with a further notable first: the UK premiere of Enescu’s Fourth Symphony as realized by the late Pascal Bentoiu, together with shorter orchestral pieces from Bartók and Schubert.