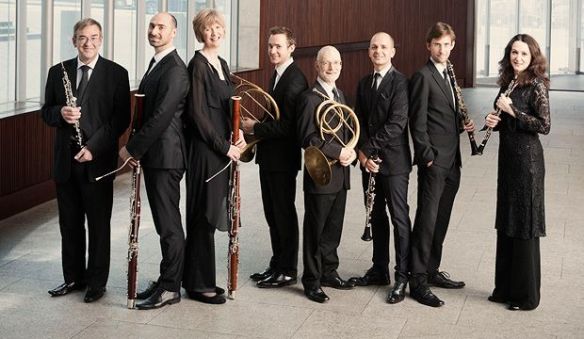 There is something immediately comforting and inspiring about the sonorities of a wind ensemble, and in this debut Wigmore Hall concert from the SCO Wind Soloists we got to enjoy Beethoven’s way with those sounds, as well as some typically mischievous tricks from Francis Poulenc.

The late opus numbers assigned to Beethoven’s Sextet and Octet are misleading, for both are comparatively early works that were published much later in the composer’s life. The Sextet, written in Beethoven’s mid-20s, is however unusual in missing out flutes and oboes in its instrumentation, presumably due to those available at the time.

Writing for a pair each of clarinets, bassoons and horns, there was a lovely deeper sound on offer, and this was fully exploited by the SCO Wind Soloists, with the bonus of the slight rasp Alec Frank-Gemmill and Harry Johnstone added with their natural horns. A thoughtful Adagio introduction (from 1:49 on the broadcast link) was soon replaced by a good natured Allegro (2:42).

The music of greatest depth could be found in the Adagio (8:56), with some lovely harmonies and intimate dialogue between the instruments. A brief but nimble Menuetto (13:00), horns in the lead, led to a charming, march-like Rondo (15:34) which wrapped up the piece in good spirits.

Poulenc wrote brilliantly for wind instruments throughout his life, usually with a spiky piano part adding a bit of extra punch to proceedings, but here we heard his music stripped back to just clarinet (Maximiliano Martín) and bassoon (Peter Whelan). This was a brilliant, fun performance, and in the first movement it felt as though the bassoon part had been written specifically to derail the clarinet’s flow. Whelan failed in this aim – but only just! A soft-hearted Romance (24:39) still had some deliberately awkward writing for the bassoon, but it set up a mischievous and perky finale (27:34), crowning a small gem of a piece lasting just eight minutes.

Beethoven’s earlier Octet – early-20s this time – builds on the instrumentation of the Sextet by adding two oboes to the treble end. It is more adventurous in musical content and form, and began with a lovely Allegro (33:02), which gave way to a touching second movement Andante (40:57), led off beautifully by oboist Robin Williams and shadowed equally lyrically by Peter Whelan.

The third movement, a lively Minuet (47:07), is in fact more of a Scherzo, a sign of how Beethoven was upgrading this movement to something much more assertive and energetic. The ensemble here was crisp and incisive, while in the quick finale (50:29), led off by the gurgling clarinet figures, the group enjoyed the close interplay of Beethoven’s writing.

The SCO Wind Soloists clearly relished their Wigmore Hall appearance, and have a distinctive rapport – lots of smiles, subtle encouragement and teamwork in evidence throughout the concert. It fitted the function of Beethoven’s music perfectly, and also suited the humour of the encore, an arrangement by Josef Triebensee of Fin ch’han dal vino from Mozart’s Don Giovanni (55:20). It crowned a thoroughly enjoyable concert.

You can listen to the music played in this concert on the below Spotify playlist:

The SCO Wind Soloists will be releasing a disc of Beethoven works for wind instruments shortly on Linn Records, further details of which can be found here You can watch an excerpt from their previous release of Mozart, also on Linn, below:

Mozart and Beethoven were among the first to properly exploit the wind ensemble as a form for communal playing. Mozart wrote several Serenades for different combinations of wind instruments, the best-known of which is the lovely Gran Partita of 1781-2. In seven movements, it is one of his very finest works: