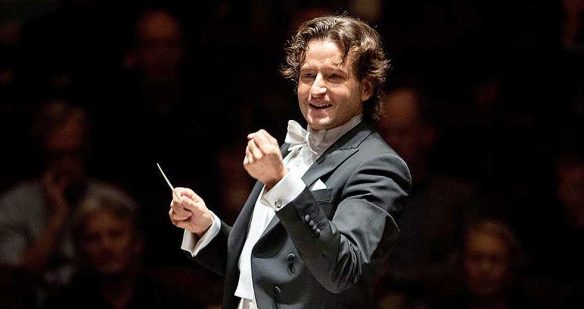 Beethoven and Stravinsky might not be felt natural bedfellows (whatever the latter claimed in later life), but this afternoon’s concert with the City of Birmingham Symphony Orchestra and fast-rising conductor Gustavo Gimeno was evidently intent on demonstrating otherwise. The overture from Beethoven‘s music for Goethe’s play Egmont duly launched the programme in imposing fashion, Gimeno securing a trenchant while slightly inflexible response across the main Allegro, with no lack of rhythmic definition as held good during an incisive peroration.

If his Third Piano Concerto finds Beethoven more overtly indebted to Classical precedent, its palpable emotional breadth is a clear pointer to what lay ahead. As soloist, Jeremy Denk had the measure of the opening movement’s often abrupt alternation between imperiousness and intimacy – not least a probing take on the development with those eloquent woodwind contributions. If the cadenza was a shade too volatile in its later stages, the fateful emergence of the coda (timpani and strings) was suitably rapt in its intensity. Raptness was equally the watchword of the central Largo, Denk pointing up the stark contrast of his E flat entry then duetting blissfully with bassoon and flute in its transition to the main theme, but as the coda (seemingly) evanesces into silence a greater dynamic subtlety would have been welcome.

Interestingly, Denk supplied this in abundance at that mesmeric point in the finale when the rondo theme ventures into the major as if to goad the music back to the prevailing C minor. Elsewhere, this was an impetuous and assured account which reached its culmination with a heady solo transition into a coda that dispersed preceding tensions through its unchecked ebullience. Denk returned for an unlikely yet appealing encore – a paraphrase (his own?) on the Pilgrims’ Chorus from Wagner‘s Tannhauser as rapidly evolved into a full-blown rag.

Few British orchestras can have performed Stravinsky‘s early ballets with the frequency and consistency of the CBSO, which is not to suggest Gimeno was other than his own man in this reading of Petrushka – heard in its streamlined 1947 revision rather than the texturally more imaginative 1911 original (which this past nine decades the orchestra has only played under Pierre Boulez). Certainly the revision’s tendency to encourage a headlong and even ruthless approach was evident in an overly regimented take on the Russian Dance, the scene-setting that precedes it audibly lacking atmosphere, but thankfully not the central tableaux depicting Petrushka and the Blackamoor – the former as nervous and agitated as the latter was moody and, not least following the arrival of the Ballerina, ominous in its smouldering sexuality.

No less impressive were the surrounding evocations of the Shrovetide Fair – the latter with its various set-pieces vividly and tellingly characterized, on route to the sudden reappearance of the main protagonists then Petrushka’s death and ghostly apparition for what remain some of the composer’s most affecting pages. The stentorian trumpet writing was fearlessly delivered, and if those concluding pizzicato chords might have been more unanimous, it only marginally detracted from the conviction of what was a well conceived and finely executed performance.

This performance will be repeated at Symphony Hall, Birmingham, on Saturday 23 November at 7pm. For more details head to the CBSO website