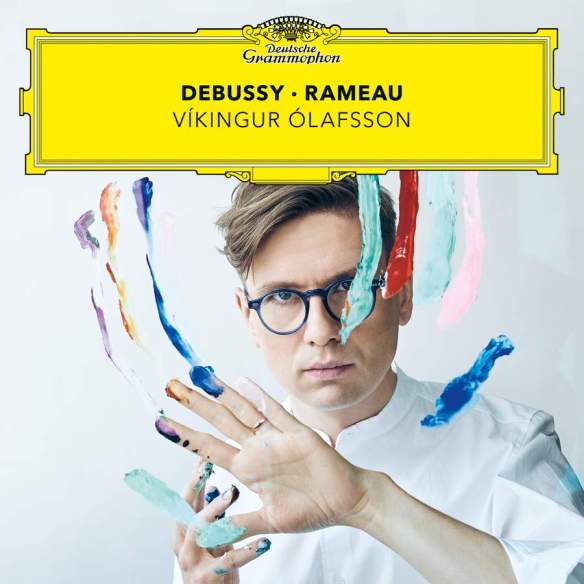 This is not a regular feature, but I thought it would be good to highlight new albums released today that fall into Arcana’s ‘circle of interest’ – the idea being that listening to them or hopefully even buying them will reward the creators in these difficult times. So, without further ado…

Víkingur Ólafsson releases his much-anticipated third album for DG today. A collection of music for keyboard by Rameau and Debussy, it has the hallmarks of Ólafsson’s meticulous presentation, and – I suspect – his meticulous and intimate approach, which has proved so effective with his albums of Philip Glass Etudes and Bach keyboard music.

Sticking with classical music but moving ever so slightly closer to Hollywood, the Sinfonia of London and John Wilson release their third collaboration on Chandos today. It sees them returning to Korngold, whose Symphony in F sharp major they played so brilliantly to celebrate their rebirth as an orchestra. This time they are taking on the composer’s glitzy Violin Concerto, with soloist Andrew Haveron stepping up from duties as orchestral leader. This is coupled with the substantial String Sextet, a work definitely worth getting to know:

Switching on the power, we arrive at Daniel Avery and his collaboration with Nine Inch Nails‘ Alessandro Cortini, Illusion Of Time. This is an intriguing match that on first listen is a successful blend of electronic soundscapes, with Avery’s wide open perspective and Cortini’s analogue synth sensibilities complementing each other:

It’s great to see Little Dragon back. The Swedish band have changed labels, arriving at Ninja Tune – and their sixth album New Me, Same Us. It finds them rejuvenated and pressing forward, with Yukimi Nagano providing the ever-distinctive vocals.

Moving outside of Europe we come to Tamikrest. I can’t pretend to have a good knowledge of African music, but here is a band I have latched onto for their unique blend of Tuareg music and rock. Their new record Tamotaït has the same thrilling combination of propulsive rhythms and heat-soaked atmosphere:

Finally – if you’re after a good house party for your nearest and dearest – you would do well to consider including some of the new Dua Lipa album! She may not be someone who needs the investment, but you can guarantee good vibes throughout Future Nostalgia, especially when the likes of hit singles Don’t Start Now and Physical are present.