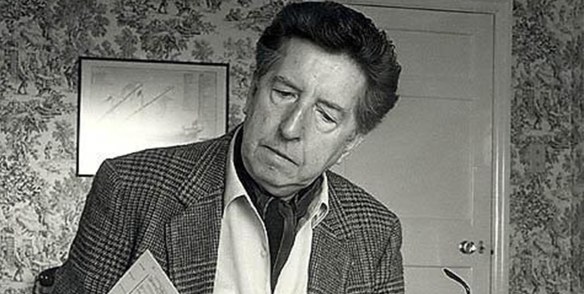 If you are in any way intimated by newer classical music, Henri Dutilleux (above) is an excellent place to start. ‘One of the most aurally sensual programmes you could ever go through’ is how Sir Simon Rattle describes this concert of orchestral works. Doubtless that statement was made with Ravel’s Daphnis et Chloé in mind, and also the music of Henri Dutilleux, the centenary of whose birth falls on 22 January 2016.

Dutilleux continues in a line of French orchestral masters whose music is every bit about the overall sound as it is about the melodies and harmonies within. His mastery of orchestral colour owes a lot to Ravel’s influence, and that of Debussy too – as you will hear in the Violin Concerto L’arbre des songes (The tree of dreams) and the virtuoso piece for orchestra Métaboles.

The ‘sensual’ description does not apply so readily to Le tombeau de Couperin. The opening Ravel piece is an elegiac suite paying tribute both to his friends who died in World War I and the past generation of French ‘Baroque’ composers, who – Couperin among them – lived and excelled in the 18th century.

Also included are the Quatre poems hindous of Maurice Delage, written just a year after the French composer travelled to India. Delage writes for a much reduced ensemble of just ten instruments to accompany a soprano in four brief but exquisitely realised text responses.

3:23 – an attractive and slightly reflective Prélude where not a note is wasted. Ravel’s writing for the wind instruments is particularly beautiful, the oboe taking much of the lilting tune.

6:54 – the Forlane­, a dance where Ravel sounds like he’s written the wrong notes – but in fact has written tunes spiced with harmonies that are surprisingly catchy. Again the orchestration is exquisite, whether in the held string chords behind the woodwind tune or the little points of percussion and harp that provide punctuation. There are four more sections that include equally likeable tunes, with the main tune coming back between each one – structured carefully as a French Baroque composer would.

13:01 – the softly scored Menuet, a dance that has its bright colourings but is sorrowful at its heart. It turns darker in its quiet, minor key Trio (14:57), where a shiver of cold where the spectre of the War can clearly be felt. This builds to an anguished climax before the Menuet, now a brighter and more relaxed presence, returns.

18:14 – there is a sense of purpose about the Rigaudon, a brisk dance where Ravel is getting on with things again, in the face of the Menuet’s sorrow. It is a fun quickstep, pausing briefly for a slower middle section with oboe (19:31) before the main material returns, broken off quickly and emphatically at the end.

28:28 – the violin begins this work on its lowest note, and after a thoughtful beginning becomes animated. The orchestral backdrop is beautifully crafted and carefully shaded. The colours are strongly suggestive of a forest, as is the humid atmosphere.

At 30:59 we hear the cimbalom for the first time as part of the orchestral texture. From 33:00 the tempo is faster, and then from 34:44 there is an upward surge to two bell strokes, which bring in the first interlude – and some agitated thoughts from the violin around 36:30. Now the music is energetic, the violin trading musical thoughts with the woodwind, and often using multiple stopping (playing more than one string at once).

Then, with the mute on, the violin disappears into the distance after 39:00. The cimbalom can be heard again – the second interlude – and then the music becomes nocturnal, and it feels as though we are at the heart of both the forest and the work.

From 41:21 we hear the oboe d’amore, part of an important duet, the two instruments close together while the strings and percussion observe from a distance. The colours here, particularly when strings join around 44:00, are especially beautiful. After a bigger passage with full orchestra, the high strings dazzle at 46:05.

Then at 46:37 the violin can be heard tuning – but this is part of the third interlude, Dutilleux not wanting to relax the intensity of the piece. Sure enough the transition to the final section is seamless, the bells prominent again – and an energetic last movement gets into full swing. Then, as the violins hold a high note, a solemn section of chords is heard, bringing in a coda.

At 52:14 a scratchy sound from the violin and cimbalom, then a big, percussive statement from the orchestra brings the piece to an emphatic end.

1:21:33 – Madras – a sultry flute sets the forest scene before the soprano comes in half a minute later. The music has sensual twists and turns, aided by the flute and cor anglais.

1:24:08 – Lahore – the keen ear of the composer for new sounds can be clearly felt here, the cello pizzicato and accompaniment seemingly from another world as they depict the ‘lone tree in the north’. This song – the most substantial of the four – ends with an exotic vocalise from the singer (music but no words).

1:29:03 – Bénarès – the cor anglais is prominent in the accompaniment here, and light percussive effects from the harp and strings vividly set the scene. The coming of Buddha on earth is announced by the excited singer.

1:30:39 – Jeypur – the flute is prominent in setting the scene, before the questioning vocal takes over. The instrumentation is relatively rich but again the flute has the final say.

Rattle describes this as the most perfect ‘bonzai’ concerto for orchestra. There are four movements, and each shows the different parts of the orchestra one by one, bringing them together at the end.

1:40:08 – sometimes with a contemporary composer you can tell just from the first chord what they are about. Métaboles is one such example, with a chord of extraordinary colours starting the first section, a fluid tour de force for the wind players. At around 1:43:30 the strings are much more in evidence, a velvety texture used. A high cello solo emerges from the mist.

1:46:38 – a lower clarinet starts off a new section where the music is quicker and lighter, aided by string plucking and carefully placed percussion.

Then with the full orchestra Dutilleux builds up a huge wall of sound to the finish. The audience reaction suggests this piece is well on the way to becoming one of the most popular in recent times.

This is a shorter suite from the ballet, which lasts around an hour.

1:59:28 – surely one of the most wonderful evocations of dawn in all music. Ravel’s wonderfully mysterious tableau starts by murmuring in the lower reaches of the sky until, with calls from flute and oboe, the sun reveals its glorious light at 2:00:26. The rest of the movement continues with a sense of wonder at the new day until a massive climax at 2:04:06, the metallic glint at the very top of the sound courtesy of the triangle.