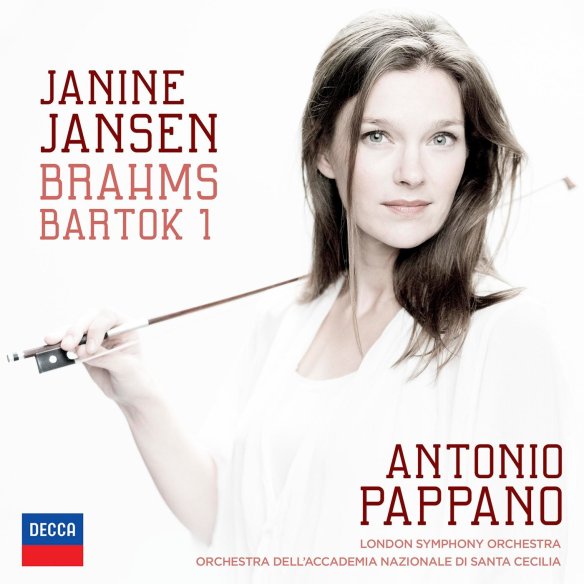 Leading violinist Janine Jansen explores violin concertos by Brahms and Bartók, bringing out the Hungarian connections between them. The accompaniment is from Antonio Pappano and orchestras from the Santa Cecilia Academy and London.

This is an unusual pairing that has not been tried on disc before, but it makes perfect sense. Brahms’ Violin Concerto has a finale that makes much of Hungarian gypsy music, so the leap from that to the thoughts of the young Bartók is not as big as you might think.

The Brahms is a big piece, heavily weighted towards its first movement, which at 21 minutes is more than half the length of the work. In this recording Janine Jansen uses cadenzas (the display parts for violin alone) written by Joseph Joachim, Brahms’s friend and the dedicatee of the concerto. Joachim was a long-fingered virtuoso, and because of that the violin part is technically very demanding.

Bartók’s Violin Concerto no.1 is the first of two such published works, and was completed when the composer was in his mid-20s. It also includes traditional Hungarian music but now the language is noticeably more modern, with crunchy harmonies, swaggering cross rhythms and a solo part that sounds more like a duel with the orchestra. In the Brahms the two forces are very much ‘on side’.

This is an inspired pairing. Jansen plays with a beautiful tone in the Brahms but just as much credit should be levelled at conductor Antonio Pappano and the Santa Cecilia orchestra, for their singing accompaniment that makes the listener want to hum along with the tunes. The Brahms has been recorded a lot of late but in this recording there is a fresh approach, as though the melodies have just been written. The oboe solo in the slow movement is gorgeously played, while the rustic finale is joyous and uninhibited.

The Bartók is similarly fresh, and again the orchestra – this time the London Symphony – cut through all the different textures and crossrhythms to make sense of this occasionally complex music. The rhythmic profile is strong once again, while technically Jansen is right at the top of her game, graceful in the first movement and gritty in the second but without losing any poise.

Yes. The two works complement each other in a highly original and brilliantly played pairing.

You can judge for yourself by hearing the album on Spotify here: