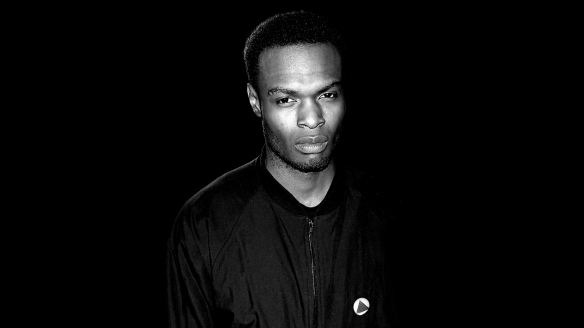 Actress (above) and the London Contemporary Orchestra

This intriguing collection of musical thought had three aims. The first was to draw on a long-held ambition of Darren Cunningham, to work with an orchestra under his Actress pseudonym, while the second and third celebrated – or rather illustrated – the ‘brutalist’ architecture of the Barbican and the data readings behind the LAGEOS (Laser Geodynamics) satellite. Into all of these blueprints, curated by Boiler Room, were fed the music of Actress – a potent blend of techno, soul and dark electronica that lends itself to classical structures and instruments. In new arrangements and pieces Actress and Hugh Brunt, conductor and co-Artistic Director of the London Contemporary Orchestra, found a meeting point of all these elements, presenting them to the Barbican with video artist Nic Hamilton.

They called the collision Momentum, a banner symbolised by a circular object that initially resembled a giant glitterball but was in fact the spacecraft used in the LAGEOS missions. In practice it rotated at a much slower pace, responding to Cunningham’s beats – if indeed there were beats at all.

There was an air of tension from the start of the performance, with a long period of silence before the music began. Even then it only gradually crept into the consciousness, and with the lights down low a feeling of forced ambience crept over the audience, restful but not relaxed in the way earlier Aphex Twin can work. Slowly Cunningham built through Lagos and Momentum, two new tracks, his set already clearly conceived on a larger scale.

Brunt’s arrangements for a string quartet of violin, viola, cello and double bass were striking, the instruments softly voiced to begin with but using a wide vibrato to make the centre of pitch far less certain. Oliver Coates’ cameo on a detuned cello was darkened by the use of a curious, semi-elliptical bow. The harp sprinkled planetary dust on the strings through the hands of Victoria Lester, while Hamilton’s astronomical backdrop helped create space in the closed environment.

As the audience began to fidget a breaking point was nearly reached, emphatically punctured by the volleys of Galya Beat, kick drums thrown from the pads of Sam Wilson’s machine. From here the music had greater power and caught the attention, the arrangements enhancing the beauty of Ascending, the harp and manipulated piano twinkling at the top of the sonic pile, while Piano Scrapes worked with subtle humour and more imaginative textures through the strings and the clarinet of Harry Cameron Parry.

Elsewhere Actress worked with claustrophobic backdrops, bringing the concrete maze of Hamilton’s Barbican video work to life. The strings provided essential colour to the largely grey backdrop of the thick but rather lush keyboards, themselves ambient but restless as before. The imaginative scoring included the creative use of a plastic bag in the percussion section.

Though it was a relatively small London Contemporary Orchestra on this occasion – much smaller than the forces used for Jonny Greenwood’s There Will Be Blood recently – it was used with imagination and flair by Cunningham and Brunt, the resulting music of substance and structure. Rather like the Barbican, in fact – together with a relative lack of pure emotion in the more calculated sections.

It would be great to see Actress flexing his muscles some more in the fascinating area in which he finds himself, bringing forms of music face to face with each other without anything sounding contrived. Future collaborations are surely inevitable; they are greatly anticipated!