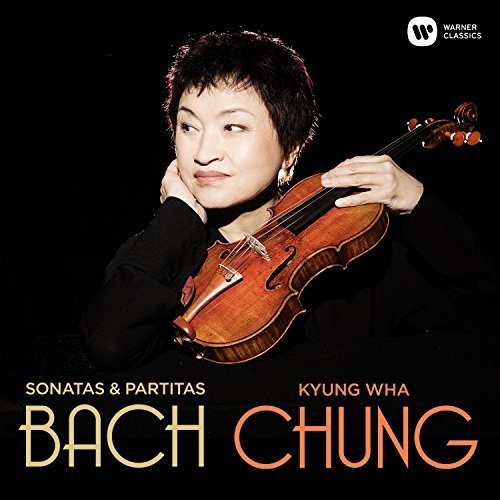 After 15 years out of the recording studio and a similar absence from concert halls in the West, Kyung Wha Chung begins a new chapter of a career dating back almost five decades with this first integral take on the Sonatas and Partitas for violin by Johann Sebastian Bach.

Written around 1720, when Bach was attached to the court of Anhalt-Köthen (a period giving rise to the many of his most important orchestral and instrumental works), these Sonatas and Partitas are to the violin what The Well-Tempered Clavier is to the keyboard.

They set a level of compositional and artistic achievement seldom equalled in almost three centuries. The alternation between forms enables Bach to pursue a clear-cut while never inflexible trajectory, with the formal clarity of the sonatas thrown into purposeful relief by the more diverse yet no less integrated layout of the partitas. Allied to this is an expressive range which extends from the poise and vigour of those movements adhering to dance measures, to the cumulative power of those appropriating more abstract models in proto-symphonic terms.

Recorded around the time of her 68th birthday, these accounts confirm that time spent out of the limelight has been to the benefit of Chung’s interpretative insight and conviction. No-one who comes to these pieces for the first time could doubt the intensity of her commitment, and while her playing betrays occasional signs of tentativeness or imprecision, there is never any sense of her technique being inadequate for this music (as, for instance, was that of Mstislav Rostropovich when he recorded Bach’s Cello Suites towards the end of his seventh decade).

Nor is there any doubt that these recordings are suited to the concentrated listening necessary for taking in this music at a single, two-and-a-quarter-hour sitting. Those who might wish to sample individual movements should head to the wistful Siciliana from the First Sonata, the incisive Corrente of the First Partita, the winsome Andante from the Second Sonata, or the nonchalant Gavotte en rondeau of the Third Partita. These interpretations are at their best in the two most imposing works: hence the Second Partita, its closing Ciaccona rendered with implacable momentum; and the Third Sonata, its imposing Fuga rendered with unflagging energy. Comparison with Chung’s 1973 recordings (Decca) confirms that any falling-off of technique is more than outweighed by the sheer intellectual control here evinced throughout.

Yes, inasmuch that Chung’s approach is always commensurate to the stature of the music at hand. Music which, of course, can take a variety of interpretations – though the present set is notable for the skill with which Chung navigates between the poles of authenticity and that more subjective approach often associated with earlier generations.

The point remains that she secures a cohesion and consistency across all six of these endlessly diverse pieces as is achieved by precious few exponents, and this can be felt to override all other considerations.

Indeed. The two discs are logically presented as a chronological sequence, with succinctly informative booklet notes from Julian Haylock and a brief statement of intent from Chung. Among recent accounts, hers needs to be heard for its formal rigour and expressive insight.