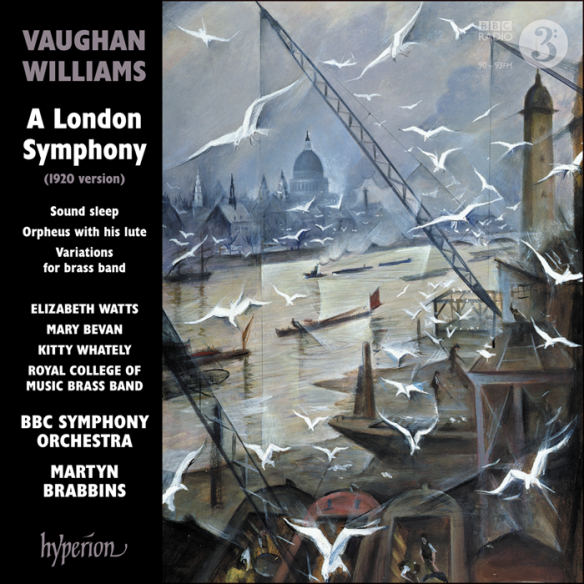 Following on from discs devoted to Elgar and Walton, Martyn Brabbins conducts the BBC Symphony Orchestra in this first instalment of his Vaughan Williams cycle, coupled with three relatively little-heard pieces from either end of the composer’s lengthy creative span.

Significantly, Brabbins has chosen the ‘second version’ of A London Symphony as revised in 1918 and published in 1920. Closer in its formal proportions to the streamlined 1933 revision than the expansive 1913 original, this features additional passages in the second and fourth movements, but it is the textural richness and subtlety which comes through most strongly in this account – among the most overtly alluring yet recorded. Rarely has Vaughan Williams’s later bemusement as to how he achieved such beauty of sound in this piece felt more apposite.

Beginning barely perceptibly, the opening movement unfolds from hazy evocation to one of London ‘in full swing’ and Brabbins captures such a progression unerringly – as he does that of the central interlude with its enfolding calm and opening-out of emotional space prior to a resumption of the earlier activity then a coda whose imposing rhetoric is never overbearing. Even finer is the ensuing Lento, outwardly a depiction of Bloomsbury Square one November afternoon though more pressingly a meditation on time and place which builds to climaxes of sustained expressive intensity. Brabbins gauges these superbly, then draws the extra material found in the coda into a seamless continuity of serene recollection. Rarely, moreover, have the numerous woodwind and string solos been rendered with such felicity as by the BBCSO.

A scherzo designated ‘nocturne’ might present problems of characterization and pacing, but neither is an issue here – Brabbins opting for a relaxed though never sluggish tempo such as underlines that teasing reticence to the fore in the fatalistic coda. The finale follows on with due inevitability – its heartfelt initial ‘cry’ launching a movement whose sectional unfolding feels more than usually cohesive as it takes in halting processional and forthright march on the way to a culmination where anguish and that sense of teetering on the brink are palpably conveyed. Brabbins takes his time in the ‘Epilogue’, slightly more extended than it became while evincing that steady emergence from anxiety to affirmation as brings the whole work affectingly full circle. Rarely have these closing pages conveyed so much of a benediction.

Absolutely, and the fill-ups are a further enhancement. Heard in its version for three female voices, the setting of Christina Rosetti’s Sound sleep audibly anticipates Serenade to Music almost four decades hence – with Elizabeth Watts no less touching in that of Shakespeare’s Orpheus with his lute likely written for a staging of Henry VIII. Almost Vaughan Williams’s last completed work, Variations is better known as orchestrated by Gordon Jacob – though its intricately intertwined sections and final chorale are thrown into starker relief by brass band.

Indeed – not least when the sound has ideal spaciousness and definition, along with probing annotations by Robert Matthew-Walker. Fine as was Martin Yates’s recent account (Dutton), that from Brabbins is undoubtedly the recording of the ‘1920 London Symphony’ to go for.

For further information on this release, visit the Hyperion website, or the BBC Symphony Orchestra. You can also read more about Martyn Brabbins here