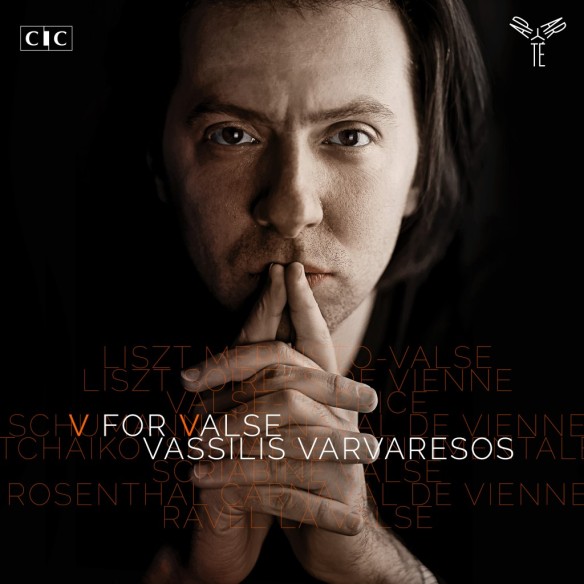 The first recital disc from Greek pianist Vassilis Varvaresos, winner at the 2016 Enescu Competition, and already heard on Schubert’s Winterreise with Dimitris Tiliakos as well as works for violin and piano by Schumann and Richard Strauss with Noe Inui (both on Navis Classics).

In an interesting conceptual ploy, the Valse (Waltz) has been taken as basis for an overview of almost a century’s piano music – during the course of which, keyboard virtuosity veered away from uninhibited display to reinforcing the emotional complexity of the piece at hand.

Varvaresos starts his recital in media res with Liszt‘s First Mephisto Waltz – the touchstone for a virtuosity fused with psychological complexity, rendered here with a combination of technical brilliance and emotional understatement as extends right to the scintillating final bars. The seventh from his Soirées de Vienne, a set of Valses-Caprices after Schubert, finds Liszt in more equable if hardly less resourceful mood, not least in the way he channels his borrowed ideas into a study as subtle formally as it is poetic and affectionate expressively.

A further highlight is Faschingsschwank aus Wien, last of Schumann’s piano cycles from his first full decade of creativity and one which tends to be overlooked in the context of several more innovative predecessors. Its outer movements can run the risk of mindless display, but this is never an issue for Varvaresos, who leavens their boisterousness with almost Classical objectivity. This applies equally to the three central movements, not least a Romanza whose poise and inwardness uncannily anticipate the piano miniatures of its composer’s last years.

Tchaikovsky‘s piano output remains relatively neglected, so it was astute of Varvaresos to include his Valse sentimentale, last in a set of six pieces which point up his indebtedness in this medium to earlier models (notably Schumann), yet whose melodic eloquence is wholly characteristic. Scriabin‘s Waltz in A flat makes for a telling foil, its melody line diffused into a harmonic radiance which blurs the expected tonal focus with teasing playfulness. Here, as throughout this programme, the suppleness of Varvaresos’s pedalling is of the highest order.

Discretion is hardly to be expected of an archetypal virtuoso such as Maurice Rosenthal, yet his Carnaval de Vienne is a riotous humoresque on themes by Johann Strauss II that makes a fittingly uproarious encore (as Varvaresos demonstrated at last year’s Enescu Festival). The virtuosity of Ravel’s La Valse is of an altogether more speculative manner, but this account makes a virtue of such ambiguity as this plays out across a structure audacious in its formal design and unnerving in its emotional follow-through – not least those fateful closing pages.

Very much so. Varvaresos is evidently among a younger generation of pianists for whom virtuosity is neither to be played up to nor fought shy of; but rather placed at the service of the music in question so its salient qualities can more fully be appreciated and savoured.

Indeed. The sound is ideal in its realism and immediacy, with Jean-Yves Clement’s fanciful note complemented by a photo which looks rather like a still from an Alain Resnais film. An auspicious release by a pianist from whom much can be expected. V for Varvaresos indeed!

You can read more about this release on the Aparté website, or get more information on Vassilis at his website The full album can be heard on the Spotify playlist below: