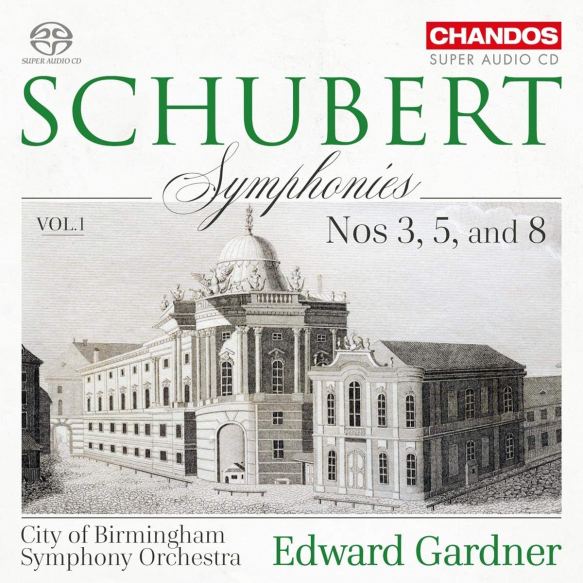 Having already tackled the Mendelssohn symphonies (and with a further instalment featuring the overtures imminent), Edward Gardner and the City of Birmingham Symphony now turn to those by Schubert in what promises to be a notable addition to the orchestra’s discography

Even with advances made (primarily through the work of Brian Newbould) in recent decades, Schubert’s cycle still tends to fall into two categories – the half-dozen mainly of his teenage years, with overt influences from Haydn, Mozart and earlier Beethoven, then the Unfinished and Great symphonies, in which the composer forges a decisive new path at the outset of the Romantic era. Whether this survey also takes in any of those fragmentary pieces that came in-between, or the drafted ‘Tenth Symphony’ from Schubert’s final weeks, remains to be seen.

This release commences with the Third Symphony, most succinct of the earlier works in its thematic economy and formal concision. Gardner catches well the anticipatory nature of the slow introduction, then steers a secure course through the main Allegro’s alternation of pert woodwind melody with lithe tuttis. More intermezzo than scherzo, the Allegretto is as deftly characterized as the ensuing Menuetto is bracingly despatched. Gardner also minimises that sense of the final Presto as unfolding in ever-decreasing circles prior to its effervescent coda.

The Fifth Symphony is the highpoint of those from Schubert’s formative years – not least in the Mozartian poise of its opening Allegro, with the CBSO woodwind at their most felicitous. Gardner’s relatively swift tempo for the Andante might lessen its inherent charm but enables him to emphasize the searching modulations into its more restive episodes – after which, the Menuetto is more explicit in its G minor incisiveness. Nor is there any lack of impetus as the final Allegro pursues a witty while also suave course through to its almost peremptory close.

From here to the intensely introspective start of the Eighth Symphony (the ‘Unfinished’) is to enter a whole new expressive epoch. The CBSO strings are at their sonorous best in the initial Allegro, here with due emphasis on its ‘moderato’ marking and accruing considerable intensity in its anguished development then fatalistic coda. The Andante complements it in almost every respect, with Gardner ensuring that the hymnal eloquence and anxious musing of its contrasting sections achieve formal and expressive parity ultimately set in relief by the coda’s radiant benediction.

Yes – thanks not least to some unerringly alert and sensitive playing, together with SACD sound whose clarity and overall perspective admirably reflects that of the refurbished Town Hall acoustic. Interpretively, Gardner occupies a fruitful middle-ground between the tensile rhetoric of Jonathan Nott (Tudor) and agile incisiveness of Thomas Dausgaard (BIS), hitherto the most consistent among recent Schubert traversals and ‘authentic’ through their conveying of this music’s essence without falling prey to merely fatuous notions of stylistic authenticity.

Indeed. An additional enhancement is the insights of Bayan Northcott, whose booklet notes will hopefully grace future instalments in a series whose second volume is keenly awaited. Perhaps Gardner and the CBSO might also consider the Berwald symphonies at some point?

You can read more about this release on the Chandos website