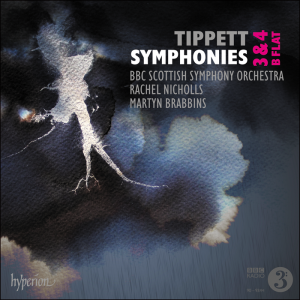 Martyn Brabbins and the BBC Scottish Symphony Orchestra follow their release of Sir Michael Tippett’s first two symphonies (reviewed here on Arcana) with his succeeding two such pieces, along with a first recording for the Symphony in B flat originally intended to be his ‘Opus 1’.

Commenced in the wake of Beethoven’s bicentenary, the Symphony no.3 is Tippett’s most ambitious in concept – its four movements falling into two parts such as interrogate without abandoning the formal archetype. Brabbins emphasizes its initial contrast between stasis and dynamism, in the process highlighting unexpected detail, though without the visceral impact of Sir Colin Davis (Decca) or Richard Hickox (Chandos). The Lento is night-music of profound inwardness tellingly realized here, albeit eschewing the ultimate intensity at the climax of the central string threnody. The scherzo that launches Part Two again predicates clarity ahead of impetus: the ensuing blues numbers – respectively soulful, capricious and plaintive – seem a little low-key, but this is no fault of Rachel Nicholls; her singing more accurate than Heather Harper (Davis) and far more insightful than Faye Robinson (Hickox) here or in that extended scena where Tippett confronts then embraces the Beethovenian tenet of compassion. Brabbins rightly ensures its final antagonism between discord and pathos is left hanging in the balance.

Although yet to regain its former eminence, the Symphony no.4 is still the most frequently heard of this cycle and here brings out the most in Brabbins’s Tippettian instincts. Expansive without becoming sluggish and considered without being turgid, it sustains the expressive arc of this single-movement design with no mean conviction – not least in the eruptive climax at its centre which forms this work’s formal and emotional fulcrum, emphasizing its centrifugal rather than centripetal trajectory (unlike Sibelius Seven, to which the present work is often if erroneously compared). Closer in its unforced momentum to Tippett’s account (NMC) than that by Georg Solti (Decca) who premiered it, Brabbins never undersells the music’s forceful persona for all that its introspective qualities are primary. One aspect of this ostensible ‘birth to death’ piece he realizes more convincingly than any predecessor is the human breathing at key moments in its progress – achieved by the subtle deployment of recent technology so the closing bars, in particular, convey an evanescing of life which the composer surely intended.

It is a fair jolt stylistically to go from here into the Symphony in B flat. This latter had at least three hearings and was several-times revised until being discarded in 1944. Received wisdom suggests a reliance on Sibelius but though its formal processes are overtly Sibelian, its sound is much less so if not yet that of Tippett. The first movement is an eventful yet gauche sonata design – its themes intensified in a fusion of development and reprise then framed by a limpid introduction that returns sombrely at the close. What follows is less a slow movement than an intermezzo in which modal and chromatic elements alternate to ambiguous effect, then a final rondo of pronounced folk inflection that builds toward an apotheosis whose hopeful optimism speaks touchingly of the ‘confidence of youth’. Brabbins finds a committed response in music where lambent harmonies and tricky if untypical rhythms go some way to offsetting any lack of melodic profile. Whatever else, the composer’s trustees were right to sanction revival of a piece that offers fascinating insight into Tippett’s creativity before it began falling into place.

As on the previous release, Brabbins secures excellent playing from the BBCSSO that does not always render Tippett’s exacting rhythms with quite the clarity or impetus required. Not that this undermines too seriously the idiomatic feel of these readings, abetted by the depth and perspective of the recorded sound. At its best (during parts of the Third and most of the Fourth Symphonies), it would certainly be first choice for those coming to the pieces afresh; still, the door remains open for a Tippett cycle that gets to the heart of this inspiring music.

Yes, but for the Third Symphony seek out a live 1976 account by Raymond Leppard and the BBC Symphony, with Josephine Barstow a magisterial soprano (BBC Classics). Notes are by Oliver Soden, whose Tippett biography has recently been published (Weidenfeld & Nicolson).

You can read more about this release on the Hyperion website, while for more on Sir Michael Tippett, visit the Tippett foundation. The BBC Scottish Symphony Orchestra can be found here, while more on Martyn Brabbins can be found here