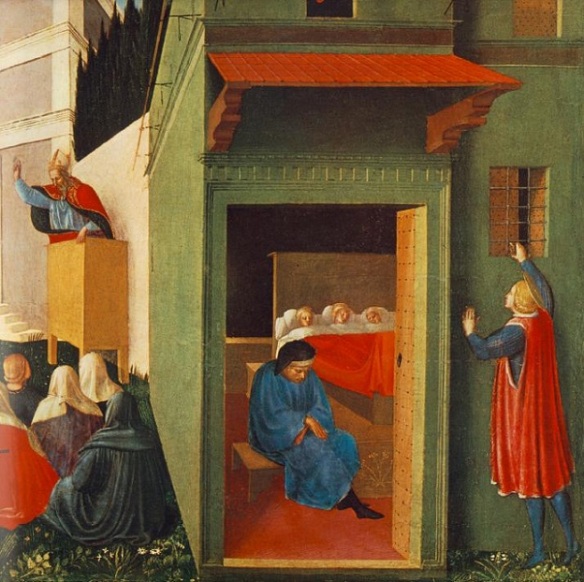 Today is a celebration of the feast of St Nicholas, the early Christian bishop who died on this day all the way back in the year 343. Nicholas is the model for the modern Santa Claus / Father Christmas, but he is also the inspiration behind a major piece of classical music, completed by Benjamin Britten in 1948.

Arcana’s sister site, Good Morning Britten, has this to say about the cantata:

St Nicolas is scored for tenor solo, chorus, semi-chorus, four boy singers and string orchestra, piano duet, percussion and organ. It was written to text by Eric Crozier, for performance at the centenary celebrations of Lancing College, Sussex, on 24 July 1948.

Britten’s honouring of the Christmas saint was timed for the centenary of Peter Pears’ old school, Lancing College in Sussex. Yet Saint Nicolas did not receive his first performance there – in fact it opened the very first Aldeburgh Festival in June 1948. Critics were requested not to write about the piece until its primary function at the school had been performed. The highly acclaimed libretto is from Eric Crozier, with whom Britten wrote Albert Herring.

Donald Mitchell, in his biography of the composer, observes that ‘for a year his music continued in the blithe spirit that Albert Herring had engendered’. He also notes how the work combines professional and amateur, Britten seeking not to exclude anybody on the grounds of musical talent. ‘There are testing but rewarding parts for the amateur singers and instrumentalists; congregational hymns, and one of the catchiest of his tunes for The Birth of Nicolas.’

This gives the strong sense Britten was writing for all ages and beliefs, and is reinforced by Stephen Arthur Allen. Writing in The Cambridge Companion to Benjamin Britten, he declares it as ‘not purely a work for religious digest’. Furthermore, ‘A duality of narrative may be perceived through the dilemma between Nicolas’s public and private world:

“Our eyes are blinded by the holiness you bear,

The bishop’s robe, the mitre and the cross of gold.

Obscure the simple man within the Saint.

Strip off your glory, Nicolas, Nicolas, and speak! Speak!”

He warms to his theme. ‘The transparent nescience of The Birth of Nicolas is reinforced by its A major setting. The presence of the tritone, governing the stepwise movement of the sequence in each phrase, demonstrates that Britten is able to write music that children can engage with and sing easily, while embodying sophisticated intervals and a symbolic dimension that offsets generic expectations otherwise associated with such material.’

After that, perhaps the words of Michael Kennedy are key: ‘There is little need to examine this cantata in detail; it is best experienced whole and without analytical preparation.’

The advice from Michael Kennedy to refrain from analysing Saint Nicolas too much is sound indeed, for this is a dramatic piece that works best taken on face value.

Once again it is possible to witness Britten’s ability to write dramatic sacred music, and as in The Company of Heaven he bolsters that with sympathetically set hymn tunes. There is a strong sense of progression through the life of Saint Nicolas, too, and at his birth he gets a really catchy tune, written for the boys’ choir in a joyous A major. As he journeys to Palestine Britten colours his relatively small orchestral forces with a glassy, oscillating line for the two pianos and wispy held strings.

Meanwhile the tenor soloist – Pears, of course – gets frequent opportunities to exploit his talent for legato singing, with some extremely lyrical writing that would seem to me to have a strong Italianate flavour, that of Verdi perhaps.

The hymn quotations invite the involvement of a congregation, another element in common with The Company of Heaven. However Britten cannot resist the odd piece of harmonic mischief, and All People That on Earth do dwell, so beloved of Vaughan Williams, gets some unexpected minor chords. I couldn’t help but think that was a deliberate thumbing of the nose!

There is, however, a certain amount of homage being paid here, deliberate or otherwise. I was sure in places I could detect hints of Elgar’s The Dream of Gerontius – especially in the way the two works end, alike in key in harmony, while there are passing elements of Handel and Bach, via Mendelssohn.

Once again Britten uses the performing spaces to his advantage, positioning the children’s choir a distance away from the main action. This is especially effective after the swell of the choir towards the end of His piety and marvellous works, which cuts to the trebles singing ‘Alleluia’ in the distance. It is a magical moment.

Equally fine are the climactic closing pages, the death of the saint marked by the singing of the Nunc Dimittis chant, Lord, now lettest Thou Thy servant depart in piece, which seals the deal on a very fine and enjoyable work.

Below you can hear the late Sir Stephen Cleobury talking about the work, and how he went about the 2013 album he made with King’s College Cambridge Choir to mark Britten’s centenary:

On the Spotify link below you can listen to the album Cleobury conducted, which also includes the unaccompanied choral masterpiece Hymn to Saint Cecilia and the celebratory anthem Rejoice in the Lamb, again under the direction of Cleobury.