This was a nicely balanced and uplifting concert that balanced the relative misery of the early March weather in London. With the rain hammering down outside the Cadogan Hall, the Royal Philharmonic Orchestra and Latvian conductor Andris Poga got on with ensuring there was plenty of warmth inside.

They began with Sibelius’s charming Karelia Suite, a work full of good tunes and typically attractive and imaginative scoring. It is an ideal ‘curtain up’ piece in the right performance, although this one took a little while to move up through the gears. The first movement Intermezzo felt a little stentorian, and could have had a lighter spring in its step, but the succeeding Ballade was nicely measured, the emotional heart of the performance and given affectionately by Poga. By the time the Alla Marcia third movement had arrived, so too had the bounce in the rhythms, and the deceptively simple string theme was given with a smile. 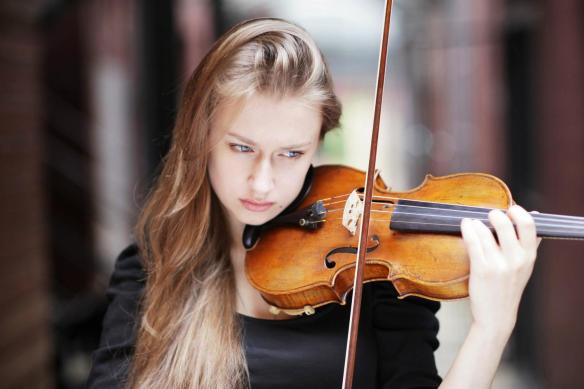 For Bruch’s Violin Concerto no.1 the orchestra were joined by Kristine Balanas (above), who led from the front in an account with passion and flair in strong supply. Yet there was an emotional distance between soloist and orchestra, who rarely interacted, and the opportunity for links through the sharing of Bruch’s wonderful melodies largely overlooked. Balanas played with a strong technical command of her Antonio Gragnani instrument, which made a wonderful sound, and the double stopping with which the finale begins was brilliantly done, the response from the orchestra appropriately breezy. Andris Poga clearly enjoyed the piece, but the distance remained throughout and hampered the work’s emotional impact.

There followed a hugely enjoyable account of Rachmaninov’s Symphony no.3, the first appearance of this work in a Royal Philharmonic Orchestra concert for a good while. Written in Lucerne but premiered by the Philadelphia Orchestra and Leopold Stokowski in 1936, the piece is unique for its successful blend of homesick melancholy and the suggestion of bright lights in America, written at a distance from both. Rachmaninov was effectively taking in the surroundings of both countries, but was ultimately thinking of home.

From the start it was clear the affection Andris Poga holds for the Third, with the carefully shaped and graceful chant theme contrasting with the upward sweep from the orchestra that followed. He was particularly impressive in managing the bracing syncopations in the finale, often tricky for orchestras to nail, and so too for the fugue that Rachmaninov tosses around the different sections towards the end. The slow movement was especially beautiful, with a solo from leader Sulki Yu that melted even the hardest heart. The same could be said for the warmly played slower theme in the first movement, beautifully floated by cellos with subtle prompting from woodwind.

What really impressed in this symphony was the orchestra’s overall sound, richly colourful and depicting vivid pictures of Rachmaninov’s surroundings. Visions of Hollywood could occasionally be discerned, the suitability of the composer’s music for the big screen uncannily made clear, but in the intimate slow movement a softer and more fragile heart was in evidence.

Unfortunately the players of the Royal Philharmonic Orchestra were not named in the programme, a shame as there were several new faces added to the fold this time around. They impressed greatly in a memorable account of a symphony finally getting its due rewards in the concert hall.

You can listen to a playlist of the concert programme below – which includes the RPO in previous recordings of the Sibelius and Bruch, plus their conductor-elect Vasily Petrenko leading the Royal Liverpool Philharmonic Orchestra in a fine account of Rachmaninov’s Third Symphony.