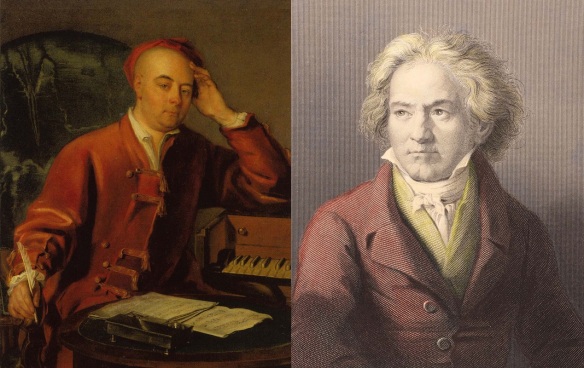 As we move on from the two Bachs, Johann Sebastian and Carl Philipp Emmanuel, towards Beethoven, we arrived at the person he described as ‘the greatest, most ablest composer’ – George Frideric Handel.

In his superbly written Beethoven biography, Jan Swafford makes the point of how “Handel, who died in 1759…gave the first inkling that there could be such a thing as a permanent repertoire. One of the things that made Beethoven what he became was the understanding, still relatively novel at the time, that one’s music could not only bring fame in life but also write one’s name on the wall of history.”

Swafford goes on to tell of how, when Beethoven was seeking outside ‘influences’ from the work of other composers, he repeatedly asked his publishers Breitkopf & Hartel for scores and literary works. These were by the two Bachs already mentioned, but extended specifically on the musical side to Handel’s Messiah, Mozart’s Requiem and Haydn’s Masses.

The effect of Handel on Beethoven’s late works – in particular the Missa Solemnis and Choral Symphony – is also considered. He goes as far as to suggest that “The whole of the Missa Solemnis is informed by Handel…” while noting that “Beethoven jotted down the dead march from Saul as he worked on the Ninth.”

We also learn of how, “out of the blue, in the middle of December arrived the forty-volume set of Handel’s works sent by his British admirer Johann Stumpff. Beethoven was overjoyed. ‘I received these as a gift today; they have given me great joy with this…for Handel is the greatest, the ablest composer. I can still learn from him.'”

Listening to Handel over the last few days has been a thoroughly uplifting experience. His instrumental music in this encounter has been full of positive intent, while one listen to the Messiah confirms it to be the work of a composer working in the white heat of inspiration. Some of Handel’s word painting here is exquisite, such as the excitement of the violins when they portray the arrival of the angels to the shepherds.

Beethoven clearly had some familiarity with Handel’s sacred works, for in 1796 he used an excerpt from the oratorio Judas Maccabaeus, ‘See, the conqu’ring hero comes’, as the basis for a brilliant set of variations for keyboard and cello.

Handel’s Concerti Grossi and Organ Concertos are revealed to be a strong blend of invention and convention – that is, following some of the models already established but with a composer putting his own stamp on proceedings. The Op.6 concertos have such a good nature to them, but also a few more spicy dissonances in the slower music especially.

The Keyboard Suites – which Beethoven may well have played – also have craft and harmonic originality in good measure:

It appears that the true influence of Handel on Beethoven’s music may not become clear until we reach the late works – but that throughout he was held in an incredibly high regard, an inspiration to Beethoven as he sought to become a lasting household name.

This Spotify playlist presents some of the works discussed, including two of the Keyboard Suites, the first of the Op.6 Concerti Grossi and Part 1 of Messiah. It begins with the second of the Water Music suites, illustrating how Handel could work to commission but find plenty of inspiration in doing so:

Routes to Beethoven moves on to a quick look at the music of one of his teachers, Anton Albrechtsberger.

1 thought on “Routes to Beethoven – Handel”