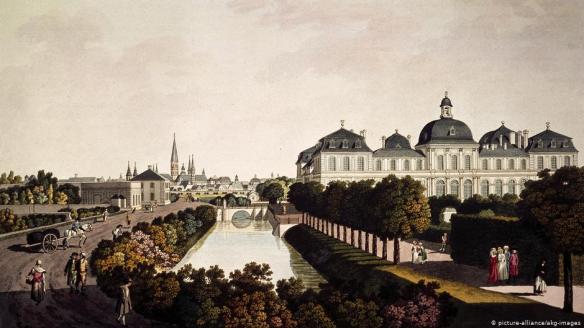 How Bonn looked around the year 1790. Artist unknown

There is a good deal of speculation that Beethoven played and improvised in front of Mozart when he journeyed from Bonn to Vienna in 1786. Reports on what actually happened – and indeed if the two composers met at all – are sketchy. Misha Donat, in his booklet notes to one of the recordings used here, says that ‘if, as we may assume, he (Beethoven) also showed him some of his compositions, they would almost certainly have included a set of three Piano Quartets, completed some two years earlier’.

These first examples of Beethoven chamber music set out in a musical idiom not used until now. This is surely a deliberate move by the 14-year-old composer, given the pressure he would have endured in either the string quartet or piano trio. Haydn and Mozart had made giant steps in those forms; the piano quartet – piano, violin, viola and cello – was untried, and it seems these early works even predate the two masterpieces offered by Mozart later the same year.

When published by Artaria, the works were re-ordered – but our listening reverts to Beethoven’s original plan, beginning with the C major work. When they were published – after Beethoven’s death – Lewis Lockwood notes they ‘so surprised even knowledgeable observers, including Ferdinand Ries, that they doubted Beethoven had written them at all, let alone at age fourteen’.

Beethoven thought highly enough of the first work in C major to recycle some of its themes in his Piano Sonata in F minor Op.2/1. Lockwood notes the work to be ‘clearly modelled on Mozart’s C major Violin Sonata, K296. You can decide for yourself here:

There is an attractive hustle and bustle about the C major Piano Quartet right from the start. Its first theme of the first movement (marked Allegro vivace – fast and lively) is a simple one, drawing the Mozart comparisons with its reliance on the notes of the ‘home’ C major chord. The piano has all the dressing, the strings content to provide accompanying roles as they might in a concert. The second theme is more lyrical but continues the piano’s dominance.

For the second movement we retreat to a slow tempo and close-knit scoring, the strings providing rich harmonic support to the piano’s melody. Soon the sweet tone of the violin takes the lead, bringing tenderness to the central section before all three strings enjoy reacquainting us with the first theme, Beethoven’s scoring nicely balanced at this point.

The third movement finale has a resolute quality. Led by the piano with a bright theme, it busies itself with developing that idea and introducing a fresh second theme, played on the piano over pizzicato (plucked) strings. The theme passes to violin – some of its most attractive music – before ending in a whirl of positivity.

Positive is definitely the word to describe this Piano Quartet, for it is a breezy first outing into chamber music for Beethoven. Even though he appears to be using Mozart as a model, there is more than enough evidence that he is at ease in this form, with an individual voice about to emerge.

Christoph Eschenbach and the Amadeus Quartet fly out of the traps in the first movement. The piano sound is a little ‘clangy’ at times, possibly due to the age of the recording, but this is a performance with plenty of energy.

The Goldstone / Cummings version goes off at quite a lick too. It has a thoughtful and considered slow movement, really nicely performed, while the third movement bustles along.

Finally the New Zealand Piano Quartet give a nicely nuanced performance on Naxos, with the best recording of the three sampled versions. Their interpretation is light on its feet.

Next up Piano Quartet in E flat major WoO 36/1