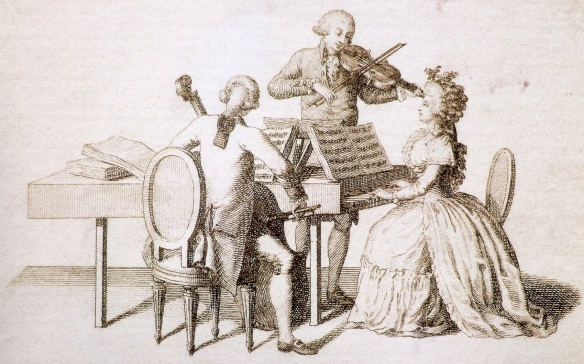 The piano trio was a growing form in the latter part of the 18th century, thanks principally to the work of Haydn and Mozart. Haydn tended towards works which gave the piano most prominence, with violin and particularly cello in a more accompanying role. Mozart was a little more lenient with the stringed instruments, but as we will see it was Beethoven who fully freed up the form.

This early work, however, stays true to the example of its predecessors, a mark in the sand if you will. Richard Wigmore, writing for Hyperion’s fine cycle of the piano trios from the Florestan Trio, sums it up. He describes the E flat work as a work that was ‘doubtless played with members of the Elector’s orchestra. This slender, amiable three-movement work seems almost tentative beside the ambitious Opus 1 trios. But it contains much charming, unassuming music, together with occasional prophetic touches’.

Wigmore delights in the subtle inventions of the third movement in particular, including a ‘quiet sideslip to a surprise key in the coda’…an ‘early example of a Haydnesque gambit which Beethoven would fruitfully exploit in the years to come’.

The piano leads off, setting the scene for a work where the violin and cello play largely second fiddle, so to speak, to the keyboard. It is an attractive theme, and Beethoven develops it in a relatively safe way.

However the second movement, subtitled as a ‘Scherzo’, is also in E flat major – and does not really exhibit the qualities of a scherzo as we might expect, with not a great deal of wit or daring, which Beethoven would later introduce to the form. The trio feels like a much safer composition as a result.

With no slow movement, the third movement is also based in E flat major, by which time we have pretty much had enough of this key, despite the attractive, open writing. There are some more adventurous moments in this movement, a couple of moves towards the minor key and some lower and quite intriguing murmuring in the inner parts that Wigmore highlights – but these are all relative.

Beethoven has got the form of the piano trio under his pen with relative comfort, but the feeling persists there will be many more radical statements to come in this form.

ALl three recordings are excellent, though perhaps inevitably the superstar trio of Kempff, Szeryng and Fournier bring impressive gravitas to even the slightest of music in this piece. They also employ a couple of daring held passages, pulling back the reins on the tempo before moving off again. Either of the three performances has much to recommend it – the Beaux Arts are charming and light footed, while the Florestan Trio are affectionate.