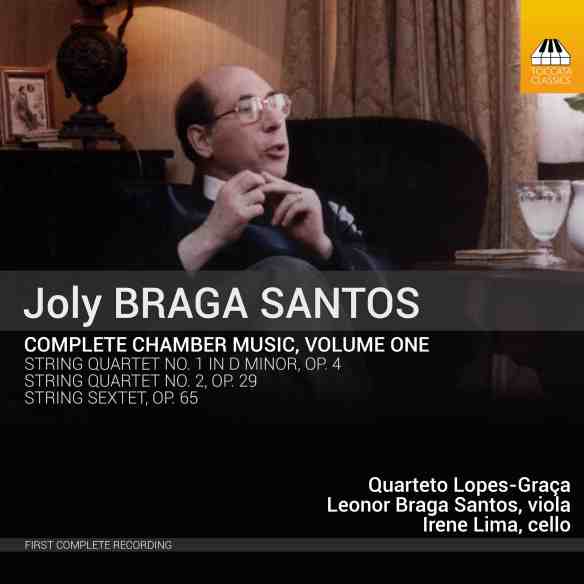 Toccata Classics now turns its attention to Joly Braga Santos (1924-88), arguably the leading Portuguese composer from the twentieth century, for what looks certain to be an engrossing traversal of his chamber output and in the company of his native country’s leading musicians.

Like the Catalan composers Roberto Gerhard or Argentinian Alberto Ginastera, Braga Santos followed an eventful trajectory from folk-inflected traditionalism to purposeful engagement with mid-century modernism – a trenchant and engaging musical personality emerging in the process.

Cast on a sizeable scale, the First String Quartet opens with a moderately paced Allegro with ample indication of this work’s stylistic indebtedness to Debussy and Ravel, even Koechlin. An eloquent viola solo takes the place of any expected development, besides complementing that for first violin prevalent elsewhere. Next comes a tensile scherzo with much recourse to additive rhythm and contrapuntal agility, then an Andante whose long-limbed melodic lines highlight each of the instruments within a harmonic context of suffused modality. At almost 13 minutes, the finale is a culmination in every sense as it elides between sonata and rondo designs before heading into an expansive coda which brings the work elegiacally full circle.

At little more than half the length of its predecessor, the Second String Quartet enriches its modal tendencies with a harmonic astringency and rhythmic impetus derived from – if not indebted to – Bartók. The latter’s final quartet might be sensed in the opening movement’s soulful introduction then an unhurried course informed by underlying anxiety. The central movement is a scherzo-cum-intermezzo that alternates inwardly speculative passages with more animated episodes, each having recourse to soloistic writing or the deftest polyphony, while the finale pointedly revisits the work’s opening prior to an impulsive Allegro whose dance-like ideas underpin this movement through to its headlong and decisive conclusion.

Among its composer’s last works, the String Sextet finds Braga Santos mining an idiom that now incorporates atonal and even twelve-note elements (though never deployed serially) with considerable finesse. Alternately sombre and desolate, the initial Molto Largo must rank with his most impressive statements as it builds towards a culmination of probing intensity. There follows a trenchant scherzo notable for its textural intricacy and range of playing techniques that open-out rather than inhibit the music’s expressive range, and if the finale feels intent on inhabiting the same emotional terrain as at the beginning, the (overly?) compressed Allegro that ensues leaves no doubt as to the determined resolve confirmed by that concluding chord.

Yes, in that the stylistic changes between the pieces are determined solely by the composer’s personal and emotional evolution rather than merely wanton desire to follow trends. Certainly, the latter two works are equally well deserving of a place in the post-war chamber repertoire.

Indeed. Performances by Quarteto Lopes-Graça (et al) could not be bettered for commitment or insight, despite a rather too resonant and unfocussed sound balance, while the overview by Piedade Braga Santos and notes on each work by Bernardo Mariano are highly informative.

You can discover more about this release at the Toccata Classics website, where you can also purchase the recording.