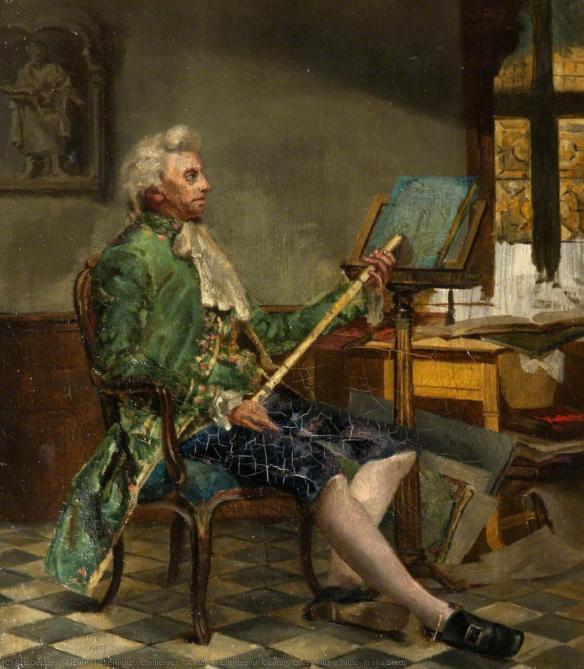 A Man in Eighteenth Century Dress with a Flute, in His Study by (Henry Hetherington Emmerson) (1877)

This is the first of Beethoven’s chamber works not to include the piano – though it was not published until after his death. The dedication, ‘for friend Degenharth’, is to a lawyer, a member of Beethoven’s close circle of friends. It has prompted speculation that the piece may have been a commission or a present.

Either way, it is a short work in two movements of roughly equal length, and continues the close affinity Beethoven had with the flute at this time. Technical demands are thought to be few (according to Flutetunes.com at any rate!) so the music is suitable for most ability levels.

The two movements of the Duo are charming. The melodic parts are closely intertwined in the first section, like butterflies dancing in a breeze. Beethoven shifts to the minor key half way through, as though intending to move off on a set of variations. The music has a more graceful feel at this point, but then the dancing butterflies return.

The instruments stay close for the second movement, where the second flute has a simple arpeggio ‘Alberti’ figuration. There is more of a dance form evident here, in triple time.

Beethoven’s domestic side is on show here, with communal music making the main aim. As a result there is nothing too challenging here, but the charms are many.

Gallois and Rampal are brilliant together, and it proves almost impossible to tell their instruments apart at times!

Next up 8 Variations on a theme by Count Waldstein