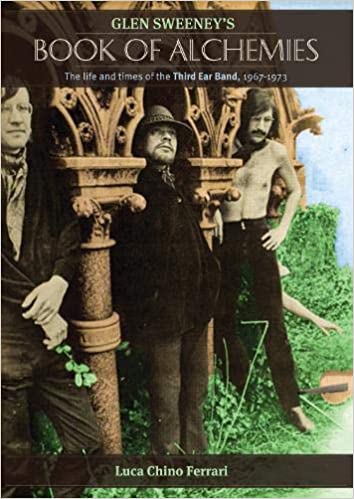 Over two decades after his pioneering biography of Third Ear Band, Necromancers of the Drifting West (Sonic Book: 1997), Luca ‘Chino’ Ferrari has now published this larger and more inclusive survey of arguably the ultimate cult band to have emerged in the late 1960s.

One thing it is not is an update of that earlier study. Instead, Ferrari has assembled a range of documents from a variety of sources centred on TEB’s guiding force: the often enigmatic and always recalcitrant Glen Sweeney. Only in those (brief) first and second sections does Ferrari posit his thinking as to why this outfit flourished, foundered yet refused to die across a period of almost 30 years. The third section showcases Sweeney’s poems and lyrics – ranging from the inspired to the not so inspired while suggesting that, with a degree of luck, the proto-new wave incarnation of the mid-1970s (aka Hydrogen Jukebox) just might have broken through.

The fourth section features Sweeney’s writings – engaging and frustrating in equal measure – but most valuable are the interviews in section five; above all, an expansive 1990 Q&A with Unhinged’s Nigel Cross as captures Sweeney in almost confessional mood. Quite a contrast with those gnomic ‘soundbites’ in the sixth section where he dons the guise of false Messiah. Much the longest section is the seventh, ‘memories and interviews’, carried out over almost a quarter-century and drawing in almost all TEB’s one-time members (except for the elusive violinist Richard Coff). They range from the humorous to the desultory, with several of those featured seemingly intent upon post-priori acts of self-justification, but not oboist Paul Minns – who, writing in December 1996 (months before his untimely death) places the triumphs and failings of TEB in the wider context of post-war Western culture with a precision and pathos that makes it required reading for anyone at all interested in this veritable fable of disillusion.

The eighth section comprises a chronological listing of audio and video releases – worthwhile especially as TEB releases from the late 1960s or early 1970s have been reissued on various occasions in numerous formats, whereas those from the 1980s onwards constitute a minefield of reissues and partial re-couplings which Sweeney must have relished. Hardly less welcome, section nine offers a day-by-day chronology of the band across 53 years and which is, almost inevitably, at its most thought-provoking when the band had all but ceased activity and those associated with it make a (not always fond) adieu – above all, Sweeney himself in 2005. Chris Cutler’s footnotes are a judicious enhancement from one ‘who was there’, while the selection of photos is decently reproduced with several stunning shots of drummer Sweeney in action.

Yes, despite vagaries of presentation (Section IV is headed ‘VI’ on p28, and where exactly is the Epilogue?) or inconsistent layout. Whether or not the attached CD indeed constitutes The Dragon Wakes, the unreleased third album from 1971, its content is never less than absorbing.

Absolutely. Apart from its historical significance, Third Ear Band’s extensive recorded legacy is still of undeniable relevance, with this latest publication a valuable and necessary resource. Whether or not it proves to be the ‘last word’ on TEB rather depends on Luca Ferrari himself.

Further information can be found here