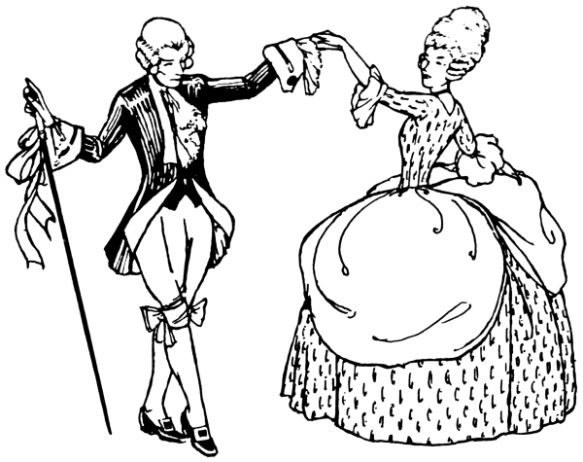 line art drawing of Minuet dance from the Archives of Pearson Scott Foresman, donated to the Wikimedia Foundation

As he grew accustomed to Vienna, Beethoven was increasingly aware of the potential for composers to make a name for themselves by writing music for dancing in the ballroom.

This was to bear fruition through sets of German Dances and Minuets for orchestra, but first we witness Beethoven trying out his skills on the piano. There is the possibility these six works were written for instruments but if they were that version is no longer available.

Instead we have a set of piano pieces that have caught on among amateurs and musicians in their infancy, the Minuet in G – no.2 in the set – becoming especially popular for Associated Board exams in the UK. Each of the Minuets has a contrasting ‘trio’ section in the middle, traditional among these dance forms – and Beethoven generally uses that to make more flowing melodies to complement the light-footed main material.

This is genial music for carefree music making. Beethoven writes the six pieces in a clearly defined sequence, the keys of each linking together nicely.

The first minuet is lively and slightly cheeky with its main theme. The second, the well-known Minuet in G, has more of a march-like quality, with a catchy tune, while its trio feels like a variation on the theme. We move to E flat major for a bold third tune, with a few chromatic leanings in the trio, then an amiable fourth minuet with a syncopated trio. The fifth minuet has a nagging and rather catchy motif, before Beethoven signs off back in C major with a bold and uplifting dance.

These pieces may be polite but fulfil their function comfortably, raising more than a few smiles in the process.

Pletnev applies a few idiosyncrasies to his reading but is otherwise very enjoyable. Jandó’s version links all six minuets together as one track, performing them as the one linked piece Beethoven possibly intended.