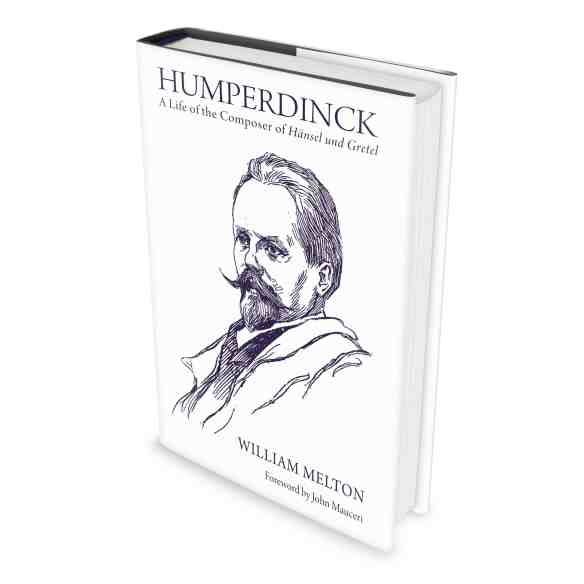 Humperdinck: A Life of the Composer of Hänsel und Gretel by William Melton, with a Foreword by John Mauceri
Toccata Press [hardback, 456pp, b/w illustrations, ISBN 978-0-907689-92-8]

Several years ago the singer formerly known as Arnold Dorsey was asked how he had chosen his stage-name, to which he replied that it was his manager’s decision and he had simply gone along with it – having known nothing about the composer in question and remaining ignorant of his music through to the present. Certainly, he took nothing by him in his eight choices on Desert Island Discs in 2004. Hardly unexpected, beyond confirmation that, then as before, the real Engelbert Humperdinck (1854-1921) was fair game on account of his diminished status.

A status that, even now, is hardly what it was during the quarter-century up to the composer’s death and which itself was owing almost entirely to Hänsel und Gretel – the ‘fairy tale opera’ whose wildfire success throughout the Western world transformed Humperdinck’s reputation, in his fortieth year, from provincial teacher and well regarded purveyor of cantatas and songs to the leading German composer of his generation. Such success might have transformed his professional and financial standing, but it also created an aesthetic image such as could only become more stereotyped as time passed. Such acclaim that he later achieved was inevitably viewed (and not merely by his detractors) within the context of that one work, ensuring that Humperdinck’s legacy was fixed in the public mind even had he ceased composing thereafter.

This is reflected not least by the dearth of writing about his music, so that William Melton’s remark about this being the first biography in English is no idle claim. With the centenary of Humperdinck’s death barely a year away, its issue could not have been more timely – were it less than a total success. Melton, whose research into and publication on the ‘lost generation’ of Romantic composers is considerable and ongoing, has left little to chance when bringing to light vital information which, while it may have been known to specialists, has lain dormant in archives on both sides of the Atlantic until the present. Its sifting and distillation enabled a deeper appreciation than seemed possible or, indeed, necessary – Humperdinck emerging as the pivotal figure in German music from the demise of Wagner to the emergence of Strauss.

Although he does not exclude musical examples or eschew analytical discussion, Melton’s is primarily a biographical study as surveys Humperdinck’s emergence – halting and thereafter effortful – from his Rhenish origins, via dogged studies then extensive journeying in France and Spain, to his unexpected involvement with the circle around Wagner; on whose Parsifal he left more than a passing impression. Staying on cordial terms with Cosima and Siegfried, his distancing from the ‘cult of Bayreuth’ says much for his unforced independence of spirit.
Melton is mindful not to divide Humperdinck’s career into a crude ‘before and after’ Hänsel scenario, even if those changes arguably inhibited his future development with the demands of teaching and other duties. Succeeding operas Dornröschen and Die Heirat wider Willen enjoyed no more than succès d’estime, with his wartime stage-works Die Marketenderin and Gaudeamus hampered from the outset by poor librettos. Most significant was Königskinder, evolving from an innovative yet impractical melodrama into a drama of no mean profundity, but initial success in New York and Europe was not sustained after the outbreak of war; its deeper subtleties even now insufficiently acknowledged. The composer thought it his greatest achievement, making the lack of a UK production for almost three decades more regrettable.

Throughout this study, Melton is an informed and reliable guide to those many incidents and intrigues that make Wilhelmine Germany so fascinating if dismaying an environment; over the course of which, Humperdinck’s life unfolds as though intent on shunning the limelight into which he had been thrust. His final decade makes for poignant reading as he battles the effects of a serious stroke, then endures the death of his wife along with various friends and colleagues. His last creative act was not musical but literary: an autobiographical fantasy, Die Zeitlose, where he finds himself transported back almost half a century to his hometown of Siegburg – experiencing with accrued wisdom the sights and persons of his formative years. His death soon after the onset of the Weimar Republic could not have seemed less relevant.

The book is rounded off by a full Catalogue of Works then an extensive Bibliography, with the numerous illustrations reproduced as part of the actual text rather than as separate plates. Three decades ago, Toccata Press put many in its debt with the first biography in English of George Enescu: if Humperdinck emerges as a less significant figure, this is hardly the fault of Melton who, in his brief yet pertinent Epilogue, describes the composer as ‘Not a Genius, but a Master’: the case for which is presented methodically and persuasively throughout his book.

Further information can be found here

1 thought on “On paper – Humperdinck: A Life of the composer of Hänsel und Gretel by William Melton (Toccata Press)”