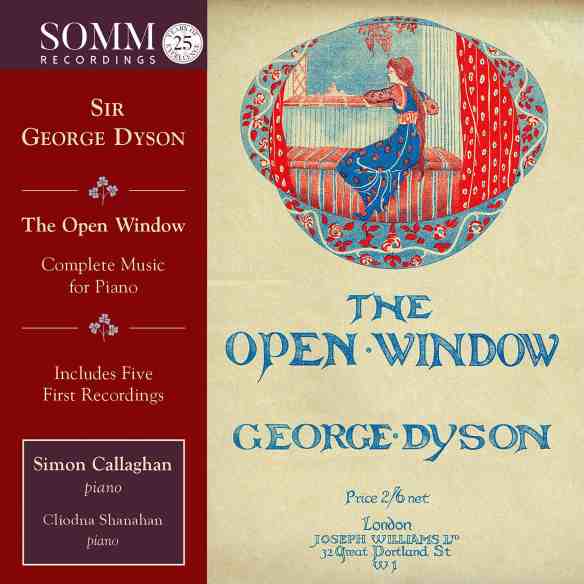 As the cover suggests, this double album gives us the complete music for piano of Sir George Dyson, including five world premiere recordings ranging from the first piece the composer wrote at the age of seven to a two-piano version of Concerto Leggero, a substantial three-movement work for piano and orchestra completed in 1951.

Paul Spicer, the composer’s biographer, contributes a wonderful booklet note telling the story of Dyson’s life and highlighting the importance of the house piano, brought by Dyson’s parents to encourage his obvious gift for musical in the midst of an impoverished upbringing. It is rather moving to read of the composer’s progression through these years, the piano by his side at every turn.

The album is beautifully programmed, taking the biggest piece first. The Concerto Leggiero has many harmonic sleights and twists and turns, especially through its first movement, to which Simon Callaghan and Clíodna Shanahan are alive. This is in complete contrast to the early Dyson piano pieces, which are little nuggets you might expect to encounter in early piano learning – but which have an emotional substance ensuring they last well beyond that sphere.

The Open Window itself is charming, with a softly undulating Field and Wood the first of its eight short movements. Dyson’s descriptions are often little picture postcards, such as the restless description of Swallows, but they frequently have an emotive core, found most poignantly in the closing Evensong. In the same way this short suite was written for young pianists to develop their prowess, the Six Lyrics offer the same opportunity through their melodic cells.

Dyson’s very first Untitled Piano Piece is also included, the seven-year old composer offering a bold attempt lasting just under a minute. At the other end of the scale the Epigrams are slightly shady but intense pockets of emotion, each one somehow finding the uncertainty of post-First World War Britain. The Four Twilight Preludes are disarmingly simple, too, elusive portraits that hang in the air and on occasion call Debussy’s music for children to mind. These small but meaningful pieces show the composer’s ability to bring emotion from what on the outside appears to be simple material.

Bach’s Birthday, meanwhile, shows the composer’s skill at working tight compositional procedures into his music. He uses fugues here in music of remarkable density and expression.

Yes – because Simon Callaghan proves a very sympathetic interpreter, and the programming gives exactly the right balance of light and shade. Given with affection, it is a charming set of music that works as a pleasant background but is more substantial when listened to closely. Dyson is a composer who, in these piano pieces, packs a lot of meaning into short duration. The experience becomes even more rewarding when enjoyed with Paul Spicer’s commentary.

Yes. The Open Window fills a notable gap in the British piano music archive, and its support from the Sir George Dyson Trust has secured the completion of an important release. It tells us much more about a composer revered primarily for his choral and orchestral music, illustrating the intimacy he could find in his work. It also serves as a timely reminder of the rich tradition of keyboard music on these shores throughout the 20th century.

For further information on this release, visit the Somm Recordings website