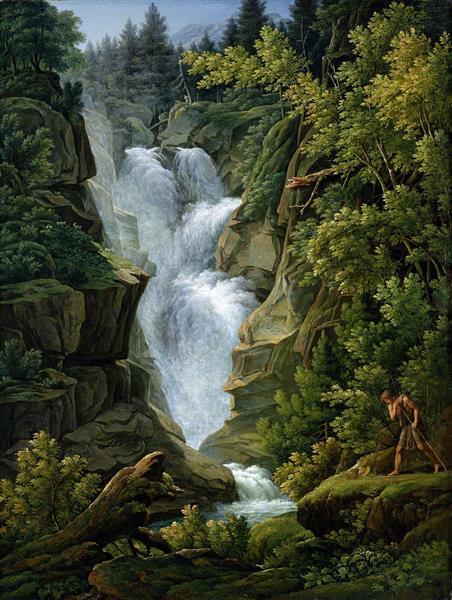 Waterfall in the Bern Highlands (1796) by Joseph Anton Koch

Beethoven’s first venture into the world of the violin sonata needs a few qualifiers. Firstly, the three works collected together as Op.12 were published in 1798 as Three Sonatas for keyboard with a violin, dedicated to his teacher Salieri. They were following Mozart’s convention where the keyboard is still given primary billing – but as the music shows, the tables were definitely beginning to turn in favour of the stringed instrument, just as they were in the two sonatas for keyboard and cello published as Op.5.

The verdict among musicologists is generally that Beethoven is sticking closely to Mozart’s style of writing in these pieces – and indeed that they might be playing it too safe. Daniel Heartz certainly thinks so, and given the detail he invests in Beethoven’s works it is surprising to see them dismissed with a relatively curt verdict. For him the Op.12 sonatas are ‘comparatively tame’. They are said to be indebted to Mozart’s works in the genre. Nevertheless they lack gripping ideas’.

Elsewhere praise is more forthcoming. Richard Bratby, writing for the recording on Signum Classics from Tasmin Waley-Cohen and Huw Watkins, declares that ‘far from being constrained by Mozart’s model, Beethoven had given it Romantic wings’. He enjoys the ‘winsome theme’ given to the second movement, on which the composer writes four variations, and the ‘jig-like finale’ with its ‘subversive rhythmic games worthy (though Beethoven would never have conceded it) of Haydn himself.

A new form for Beethoven – and one that he approaches with characteristic vigour. The first of what would be twelve published sonatas for the combination of piano and violin is enjoyably upbeat and full of melodies – and concise, too, as the composer keeps his musical arguments to the point.

That said, the first movement is quite a sizable structure, beginning with a flourish from both instruments that sets a sunny mood and the close musical relationship between the two instruments. Beethoven, who played the piano with violinist Ignaz Schuppanzigh (quartet leader for Prince Lichnowsky) in the early performances, is immediately at home

The theme and variations of the second movement are a familiar tactic but freshly employed, especially when the third of the four variations moves into an explosive section in the minor key. Beethoven, an acknowledged master of the variation form, is still finding new ways of pushing himself.

The third movement has the best tune, and it’s a surprisingly angular one, with big melodic leaps – but it stays in the head, helped by the repetitions demanded by the Rondo form. Beethoven is off and running in the violin sonata form, and though Mozart is undoubtedly an influence, the overall voice is unique.

The above is only a snapshot of a remarkably high-level discography for these sonatas, with a wide variety of approaches. Yehudi Menuhin and Wilhelm Kempff have a wonderfully close rapport and obvious enjoyment of the music. Josef Suk and Jan Panenka are brightly lit on an older Supraphon recording, which is brilliantly played if a little too ‘full-on’ at times.

The newest recording, from Frank Peter Zimmermann and Martin Helmchen, has a youthful vigour while the only period instrument example here, from Midori Seiler and Jos van Immerseel, has an exciting cut and thrust.

The Spotify playlist below does not contain the Barritt / Lisney version, but does include a highly powered account by Gidon Kremer and Martha Argerich, recorded for Deutsche Grammophon: