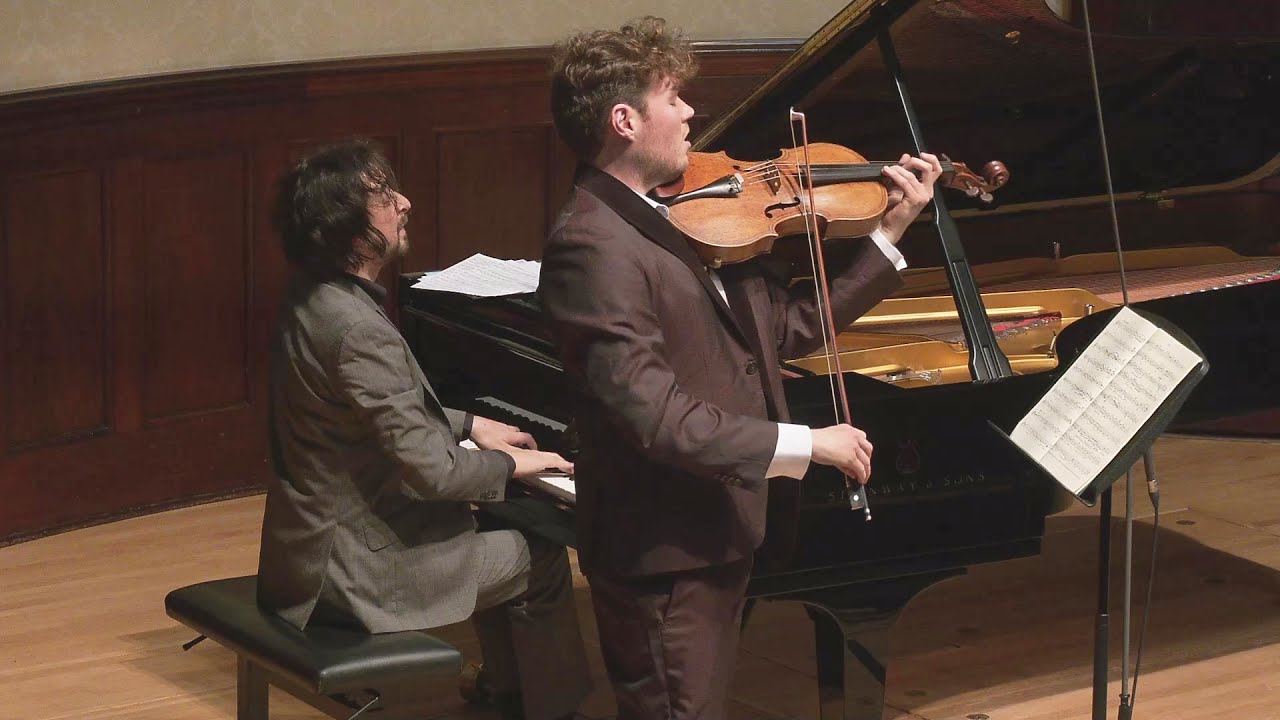 Wigmore Hall, London
Monday 10 May (review of the online broadcast)

This was, on paper, an ideal match of repertoire and performers – and it proved that way on screen too, as the Wigmore Hall served us the latest offering in its lunchtime concert program.

Timothy Ridout and Tom Poster are both beneficiaries of the invaluable Young Concert Artists Trust (YCAT) scheme and the BBC’s New Generation Artists program, of which Ridout is still a member. They are both plotting exciting paths as distinctive artists, and as a duo they enjoy an easy rapport, clearly relishing the music they play – an observation which can never be taken for granted!

The two sonatas published as Op.120 are Brahms’ final notes in chamber music, and indeed among his last works altogether. To have younger artists playing them is to reveal the youthful heart amid their autumnal colours, showing off their elusive qualities and winsome melodies.

Both works may have originated for clarinet and piano but work equally well through the burnished tones of the viola. Indeed Ridout proved with the first notes of the Sonata in F minor Op.120/1 that the range is ideal for his instrument, and the tone – not to mention Poster’s complementary piano line – was ideally weighted once he had fully secured the intonation.

The second movement had a cold shiver, thanks to the use of less vibrato, but grew warmer as it progressed. The genial Allegro grazioso was a treat, the finale more celebratory but enjoying its flowing second themes too.

The E flat sonata was if anything even more successful, lighter on its feet and with airy phrases and interplay. The first movement bobbed and weaved beautifully, especially when Ridout was playing in the higher register, which Poster clearly relished. The second movement literally rolled up its sleeves for a powerful outpouring, Ridout’s tone beautifully supple. By contrast the central section benefited from the burnished tones of the double-stopped viola. The finale’s theme and variations were well judged, thoughtful and mellow to begin with but then more capricious as they progressed, finishing with a thoroughly convincing flourish.

Between the two Brahms works was an interesting new piece by Kurt Schwertsik, commissioned by Ridout himself. Schwertsik is a Viennese composer now in his 70s, aware of his place in musical history but making original and intriguing music. This piece was characteristically elusive, under the intriguing title Haydn lived in Eisenstadt. Set in several movements, it posed questions and answers, but remained curiously unsettled. BBC Radio 3 presenter Andrew McGregor thought the piece had ended at one point, only for another two movements to follow – a situation we have all surely experienced as audience members! Ridout swept through the longer phrases of the penultimate movement against softly tolling chords from the piano, before the last movement threw furtive glances into the shadows amid bursts of activity, ending in a similar vein to early Schoenberg.

Poster ensured the harmonies were a point of focus throughout, hinting at exotic late Romanticism but never quite settling in that mood. This was a piece of intriguing thoughts and colours, a substantial utterance well worth hearing again. It proved the ideal complement to the poised Brahms sonatas around it – and the encore of the older composer’s Wie melodien, with which the concert softly concluded.

This concert is available to play for 30 days using the YouTube embedded link above.