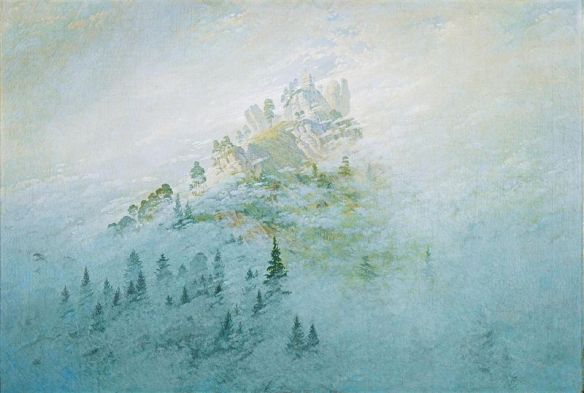 Morning Mist In The Mountains, by Caspar David Friedrich (1808)

The roots for the fourth published quartet in the Op.18 set are thought to go back as far as Beethoven’s time in Bonn, where sketches for this piece could well have been made. It was, however, the fifth completed work in this group of six, and sits after two relatively sunny works in G and D major respectively.

Robert Simpson, writing about the quartet, identifies ‘a direct shortness of address, a certain impatience with the finesse of transition, and a clear simplicity of texture, with instantly assimilable melodic invention. For all this, there is no lack of subtlety in the proportions, and the sense of movement is as perfect as a cat’s.’ He identifies the Minuet as the most serious movement of the four, ‘having the urgency of some of Beethoven’s later scherzo movements’. The finale is ‘one of Beethoven’s rare excursions into the Hungarian style of which Haydn was fond’.

Ludwig Finscher is more critical, going as far as to identify this piece as ‘undoubtedly the most problematical of the set’, suggesting influence from Mannheim and a semi-orchestral approach.

It almost wouldn’t be a set of early Beethoven works without a work in C minor, as the composer revisits one of his darker keys. Yet there is not quite so much edge of the seat drama as the early Piano Trio Op.1/3, nor the Pathétique sonata.

Yet there is a good deal to enjoy, serious though the approach is. Each of the four movements shares the tonality of C, though the slow movement gives us a little respite from the minor key tonality. There are shafts of light here, as there are in the ‘trio’ section of the third movement, after its resolute start.

Beethoven again uses the third movement as one of his more modern sounding sections, following as it does after a straight faced but relatively conventional first movement and a thoughtful second. It is the finale where the fireworks occur, especially if the quartet performing the work take the theme a bit faster each time it comes back. It can be witty and more than a bit outrageous, a great piece to see in concert – and a final tune that keeps you whistling as you head for the door!

The Melos Quartet are excellent in this piece, with a quickfire fourth movement – while the Jerusalem Quartet also give a very fine account. The Quatuor Mosaïques once again have a lovely sound, their slightly reduced vibrato helping bring out the links to Haydn and Mozart, while keeping the music pointing firmly forward in its direction.

Next up String Quartet in A major Op.18/5