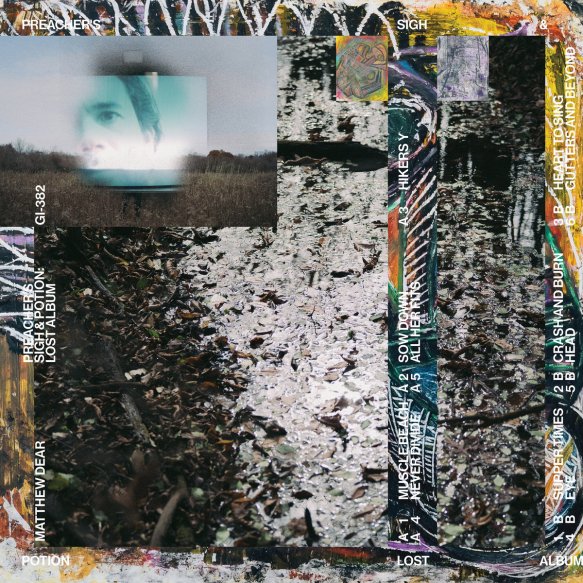 Matthew Dear has shown himself to be an incredibly versatile electronic music artist over the years. His distinctive baritone has powered a number of successful song-based albums, while on the instrumental side his Audion alias has shown him to be a techno producer of some repute. Preacher’s Sigh & Potion comes to light twelve years after its composition, at a point where the success of his Asa Breed album was pushing Dear in a more electronic direction.

This opus, entertainingly described as ‘a spirited country romp in the techno barn’ in the press release, was shelved as Dear followed his ‘switched on’ path, but its finger-picked guitar roots can now be revealed in songs that trace back to the music his father was making in the late 1960s. Dear wrote the music in Texas, and something of the wide open spaces works its way into the music.

A fascinating blend of influences and styles. As Dear himself notes, the production is not at all fussy, leaving rough edges and raw vocals that work really well given the musical styles at play. Those who are only familiar with Dear’s sleek electro pop might be surprised at the twanging guitar sound on Crash And Burn, which brings Beck’s Devil’s Haircut to mind, and also on Heart To Sing, where the instrument twangs against a murmured vocal. It appears right from the start, too, powering the easy paced Muscle Beach.

Despite the guitar craft the main pull for this album is once again Dear’s voice, the key instrument. He has a tone similar to Depeche Mode’s Dave Gahan in its midrange, but at the same time he is capable of plumbing the depths alongside the bass, not to mention the occasional falsetto.

The highly expressive vocals power some excellent songs. Hikers Y is the most meaningful, Dear placed against a lone beat as he finds solace alone, admitting ‘I’m through with all the conversation, I was never good with conversations’. Sow Down has a familiar chugging rhythm but a full acoustic guitar sound, while All Her Fits has a softer centre, cushioned by slow moving string lines. The dappled electronics of Supper Times continue this thread.

Largely. The uncluttered production is a plus, speaking of an instinctive recording process, though there are some song structures Dear might have changed and stretched. Less is definitely more in this instance though, as the shorter songs still leave their mark.

Yes. For fans, this will be an important piece of the Matthew Dear jigsaw, left incomplete until now. It also places the excellent Asa Breed and Black City in context, illustrating in the process just what a versatile producer and vocalist he continues to be.