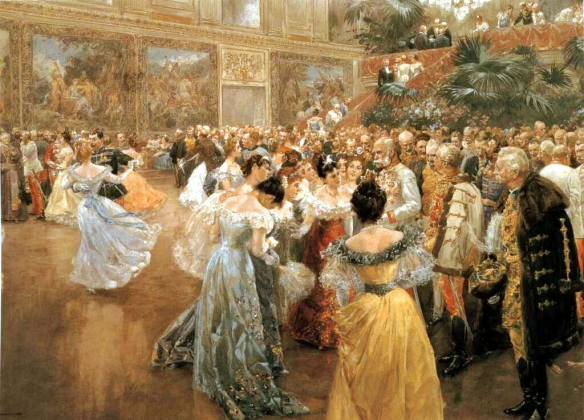 Two ladies are presented to Emperor Franz Joseph at a ball in the Hofburg Imperial Palace, painting by Wilhelm Gause (1900)

As we know from earlier examples, Beethoven often turned to the Ländler, a folk dance in 3/4 time, as a way of helping entertain his Viennese clientele. He was able to score them for different instrumental combinations, presumably in response to the circumstances of the entertainers. This set is originally for two violins and a bass instrument – but as with many of these dances was also reworked into a piano version.

D major was Beethoven’s ‘go-to’ key for Ländler – and five of the six examples in this small set are in that key. The only exception is no.4 in D minor, which works well as a ‘trio’ section if all six are played back to back. It is a frown in comparison to the other five, which are carefree examples of Beethoven fulfilling a function with ease.

The first is bright, and light on its feet, the fifth has an attractive flourish but feels half-finished. Typically the sixth and final dance, a simple arpeggiated affair, signs off with a coda.

Some attractive versions – including an account for small string ensemble, nicely played by Consortium Classicum.