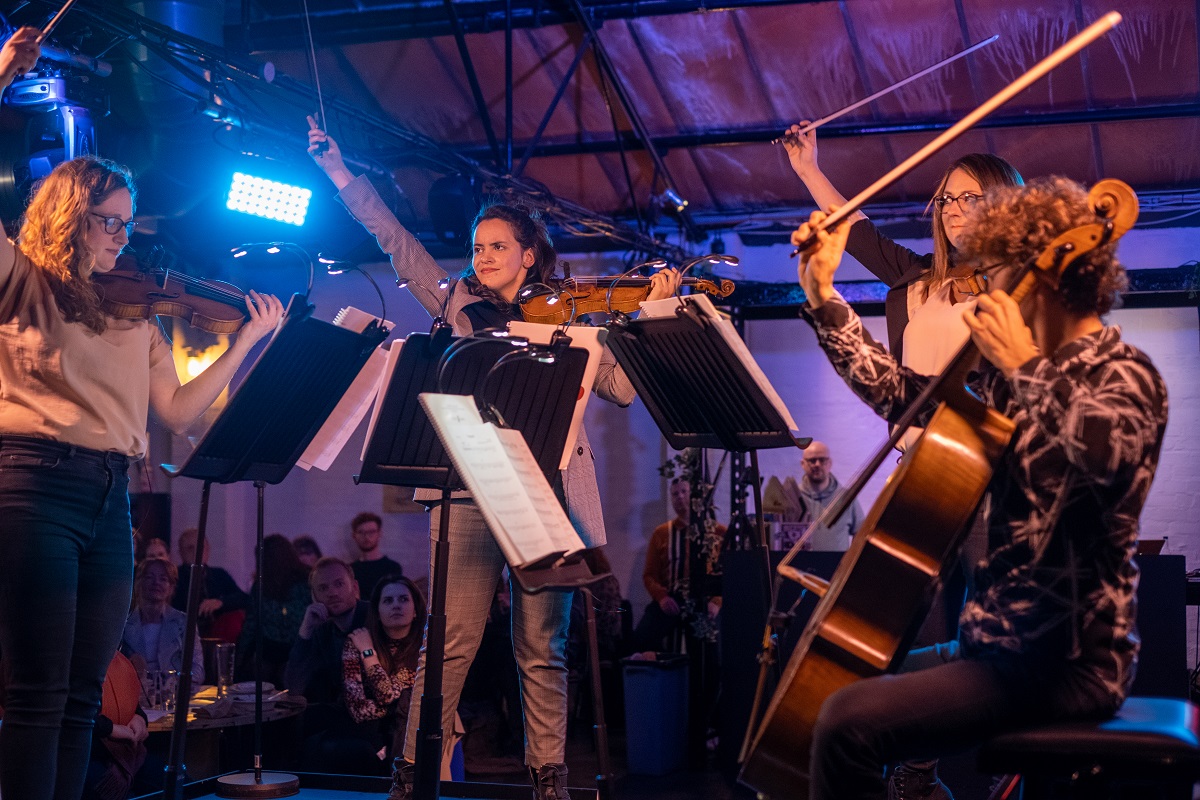 The City of Birmingham Symphony Orchestra’s ‘Out & About’ schedule has seen musicians playing at venues from railway stations to suburban pubs, but tonight’s Symphonic Sessions, billed as ‘‘the perfect evening for the musically curious’’, was a more ambitious undertaking.

The venue was Hockley Social Club – located closer to Newtown and an area which, with its rundown warehouses next to remnants of faded civic planning, is ripe for redevelopment of a kind encountered on the other side of Great Hampton Street. Such urban realism aside, it was an ideal setting for an event designed to appeal to the young professionals living or working in this area, and the capacity (300 or so) attendance was gratifying to club and orchestra alike. Assorted street food and designer cocktails were some of the attractions available on the night.

The live element consisted of two half-hour sets played by a quartet drawn from the CBSO, situated on a raised central platform, and amplified so neither visibility nor audibility was an issue. The first set enjoyed a lively start with Year of the Boar from Sufjan Stevens’s zodiacal electronica Enjoy Your Rabbit, popularized in Michael Atkinson’s arrangement for the Osso Quartet. One of the most arresting younger American composers, Caroline Shaw has written widely for quartet but, while Entr’acte provided a showcase for the musicians’ dexterity – not least cellist Arthur Boutillier – its fractured continuity tried the patience of numerous punters. Not so those teasingly ironic excerpts from Anna Meredith’s Songs for the M8 – with Sigur Rós’s evergreen Hoppípolla, as reimagined by the Vitamin Quartet, a delightful signing-off.

The inward fervency of Stevens’s Year of our Lord began a second set that touched on more Classical fare with a visceral take on the second movement of Shostakovich’s Eighth Quartet, then a lucid First Contrapunctus from Bach’s The Art of Fugue that only gained in eloquence on restarting after violinist Colette Overdijk had lost her battle with a dislodged microphone. The undoubted highlight was Bryce Dessner’s Aheym (Homeward) – a commission from the Kronos Quartet for the guitarist of The National, this is music whose propulsive energy and tensile interplay were to the fore in a performance which brooked no compromise. Violinist Kirstie Lovie and violist Amy Thomas then came into their own in excerpts from the Danish String Quartet’s folk-song anthology Wood Works, which made for a scintillating conclusion.

Either side of and in between the live music, low-key DJ sets (at least until the half-hour prior to closing) from ‘local tastemaker’ Pritt Kalsi did much to enhance the atmosphere for what throughout was a lively and appreciative audience. What proportion can be persuaded to make CBSO concerts at Symphony Hall a regular part of its fixture-list remains to be seen, though feedback on the ground was encouraging. Whatever else, the future of live events looks to be one in which listening across the spectrum of musical styles and genres has become the norm.

Good news, therefore, that Symphonic Sessions is destined not to be a one-off experiment, with the follow-up having been set for Thursday 2nd December. Whatever the line-up of musicians and music, it would seem certain that ‘‘A splendid time is guaranteed for all’’.

Further information on Symphonic Sesions can be found here. Further listening on the featured music can be enjoyed through the Spotify albums below: