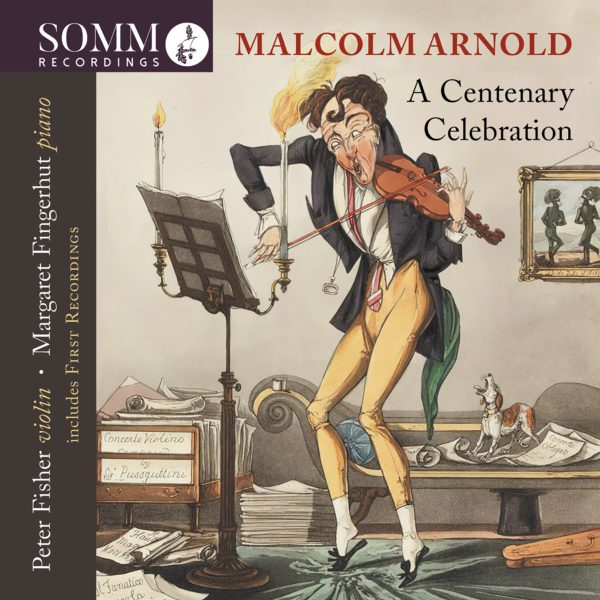 SOMM Recordings marks the centenary of the birth of Malcolm Arnold with this collection of his music for violin and piano, including a number of arrangements as are here receiving their first recordings, in what is an (unexpectedly?) wide-ranging overview of his creativity.

The three original pieces find Arnold gradually evolving a distinctive personality. If his First Sonata is indebted in many aspects to Bartók or Shostakovich, the tensile expressive contrasts of its opening Allegretto then the plaintive melancholy giving rise to wrenching anguish of its central Andante posits an emotional disjunction that the final Allegro’s stealthy tarantella can only waylay prior to a scabrous close. Its tensile single movement unique in Arnold’s output, the Second Sonata unfolds as oblique variations on a pensive theme whose speculative final guise implies much more than is being said. Playable separately, the Five Pieces (for Yehudi Menuhin) is a cannily integrated sequence that moves from an acerbic Prelude, via an edgy Aubade and a bittersweet Waltz, to an impassioned Ballad then a jazzy Moto perpetuo.

The arrangements from Arnold’s sets of dances provide ready-made encores. David Gedge’s take on the Scottish Dances is wholly idiomatic – hence the strutting gait of the Pesante with its ‘Scotch snap’, careering toward inebriation of the Vivace, wistful naivety of the Allegretto and whirling energy of the final Con brio. The English Dances selected by Paul Harris makes for a viable collection as it moves from the insouciant Op.33/2 and wistful Op.27/1, via the melancholic Op.27/3 and ruminative Op. 33/2, to the resolute Op.33/1.

The miscellaneous arrangements were all done by Alan Poulton – who, as Arnold’s manager during the 1980s, played a vital role in his rehabilitation as a composer. One of two specially written additions for Kenneth MacMillan’s ballet Solitaire, Sarabande is a mellifluous gem – as, in its rather more sensuous way, is Lola’s Theme from Carol Reed’s film Trapeze. Nor is a ‘Suite’ derived from David Lean’s Hobson’s Choice found wanting as a breviary of this inimitable film (Arnold’s favourite from his more than 120 scores), and the suave Madrigal from Ronald Neame’s The Chalk Garden gives no hint of that film’s ominous subject-matter. Conceived as a jingle for Player’s cigarettes then refitted for BBC2’s My Music series, Thème pour mon Amis is a delightful jeu d’esprit with which to recall this much-missed personality.

Yes – given that Arnold, a professional trumpeter and skilled composer for brass, had ‘across the board’ mastery of instruments such that his writing for strings is hardly less idiomatic, as is witnessed by the original pieces. The arrangements should not be regarded as mere pièces d’occasion, given that these include several of Arnold’s most appealing melodic ideas and are worthwhile recital additions. The performances by Peter Fisher and Margaret Fingerhut, both long-time advocates of British music, could hardly be improved on for sensitivity and insight.

Indeed. The recording is well-nigh ideal in terms of the balance between these instruments, with Alan Poulton’s booklet notes highly readable and informative, though note the correct running-order of the English Dances as discussed above. Great booklet-cover artwork too!

You can discover more about this release and listen to clips at the SOMM Recordings website, where you can also purchase the recording. For more information on the Malcolm Arnold society, click here – and for more on the artists, click here for Peter Fisher and here for Margaret Fingerhut.