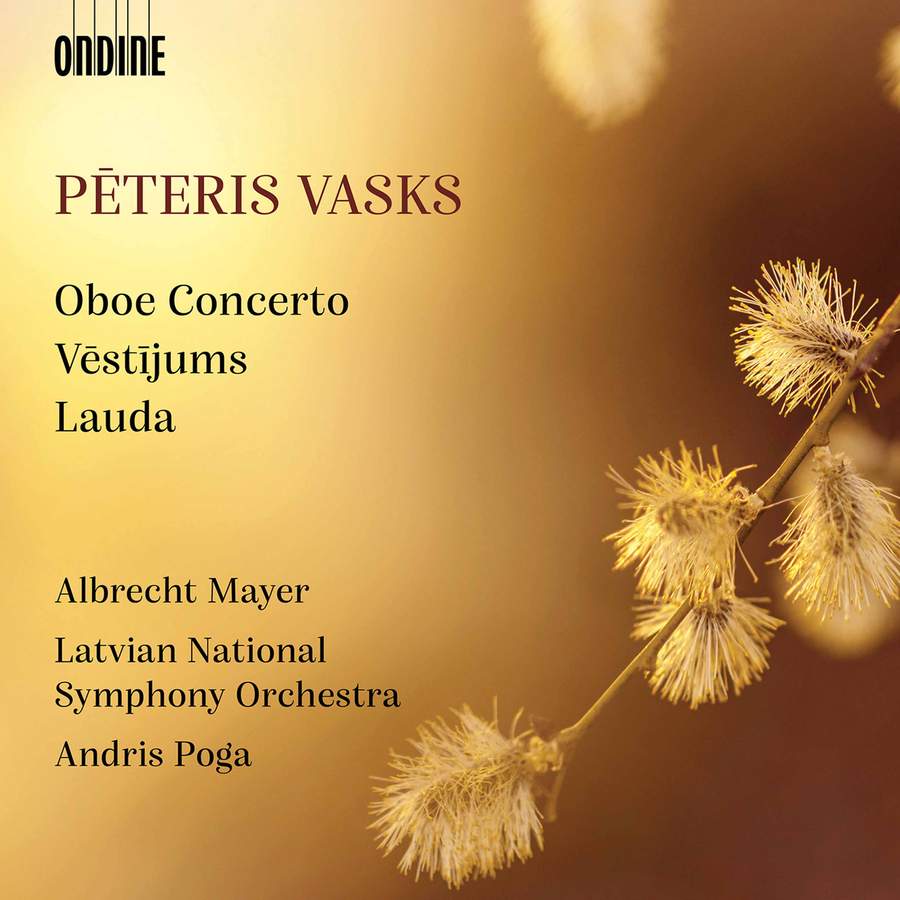 Ondine continues its coverage of Pēteris Vasks (b1946) with this release featuring his recent Oboe Concerto, alongside pieces from the 1980s, in what is a viable overview of the music of his maturity and reminder of his status as the leading Latvian composer of his generation.

Premiered in October 2018 with the performers on this recording, the Oboe Concerto is the seventh concertante work Vasks has written (his third for woodwind) and, at over 33 minutes, is on a sizable scale. Of its three movements, Morning pastorale has a preludial function in the way that the soloist emerges gently and wistfully against a discreet orchestral backdrop. This gradually builds to a climax, at whose apex the Scherzando begins with its lively interplay between soloist and orchestra – at length subsiding into a secondary ‘trio’ theme of piquant elegance. There follows an animated development, culminating (just before mid-point) in a plaintive cadenza then return to the opening music, prior to a coda of some fervency which   is held over at the start of Evening pastorale. The soloist duly comes to the fore for a calm soliloquy, building towards a forceful climax before a return to the mood of the opening and a whimsical leave-taking. A limited range of expression might leave this work seeming over-long but, with Albrecht Mayer pacing it superbly, the larger design more than sustains itself.

Of the two earlier pieces, Message – scored for two pianos, strings and percussion – reflects the impact of minimalist traits in its relatively static harmonies and rhythmic repetition, while Lutosławski (then completing his influential Third Symphony) and Górecki (then in his most overtly minimalist phase) can be detected in passages of textural freedom that afford contrast with those of expressive directness. Vasks himself comes through during the climactic stages, the music’s restrained fervour heightened on the way to a culmination of scintillating impact.

Although only his second major work for full orchestra, Lauda is typical for the way Vasks builds its cumulative structure through a dovetailing of instrumental groupings over a steady rhythmic undertow such that an inexorable momentum comes gradually, even unexpectedly to the fore. The journey is a stealthy and eventful one that draws both modal and plainchant elements into its emotional orbit; with the brass assuming dominance as the title is evoked in a resounding climax which leaves woodwind then strings musing plaintively in its wake.

Yes, in the main. Whatever the stylistic variety across his output of several decades, Vasks remains a relatively self-effacing composer who never seeks to gain listeners’ attention by overly demonstrative means. His is rather an incremental and slow-burning approach which yields its musical rewards often in retrospect, as is true of the Oboe Concerto and – albeit to   a lesser degree – of those other works here. It helps that the playing of the Latvian National Symphony Orchestra, under the assured direction of Andris Poga, is so attuned to his music.

Yes, and not only to those who have already acquired previous releases from this source. The sound is up to Ondine’s usual standards in its clarity and realism, along with detailed booklet notes from Orests Silabriedis. Hopefully Vasks’s recent Sixth Quartet will be recorded soon.

You can discover more about this release at the Ondine website. You can read more about Vasks here, and click here to read more on soloist Albrecht Mayer. The Latvian National Symphony Orchestra are here, while conductor Andris Poga’s website can be accessed by clicking here.