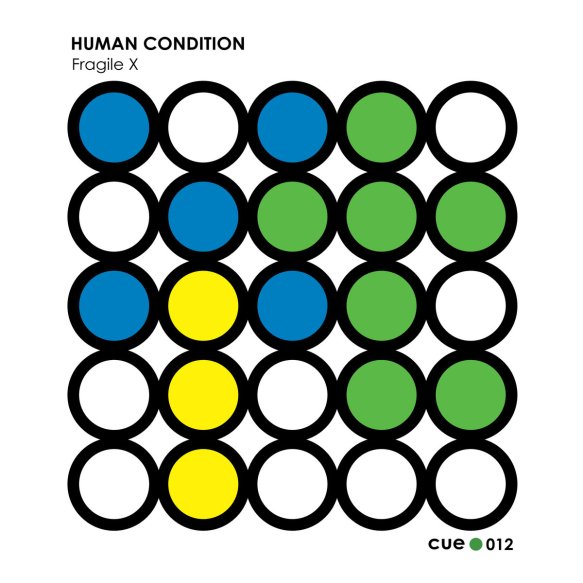 The Cue Dot Series reaches a dozen releases with this substantial piece of work from Fragile X – the alter ego for Glasgow-based musician J. Gorecki. He has designed an album to question aspects of human nature and instinct, in particular personal growth, but – as he details in the commentary alongside the album – the answers are firmly weighted towards the positive.

Human Condition – as its title implies – is a mixture of highs and lows, but the music here gives the listener a wholly positive experience. Gorecki writes with great assurance, gently probing at our thoughts and feelings as he does so. Cogito ergo sum (which translates as I think, therefore I am) is the ideal way to set the scene, soft-grained textures cushioning some more probing melodic lines, and introducing us to a warm blend of electronically and acoustically-derived sounds.

The softly oscillating figures of The Good And The Beautiful have attractive, treble-rich colouring which is a hallmark of Gorecki’s writing, with golden hints to the textures from half way through. Object / Subject has murmuring voices as part of its overall ambience, before it pans out into a wonderfully spacious train of thought. Eudaimonia uses what appears to be a small collection of time pieces, each one creating an ambience among themselves, while A Question I Have Become For Myself has some distorted thoughts but also a reassuring, slow chorale in the background.

You Are has watery percussion and rippling chords, presenting a beautiful epilogue that gradually falls under the influence of a slow, brooding melodic line. This slightly darker aspect has already revealed itself in the shady Space Of Appearance, a relatively brief but sombre time for contemplation.

It does. The album is best experience as a single span of music, its natural flow secured early on and sustained throughout the nine tracks. Gorecki shows himself to be as at home in longer structures approaching ten minutes as he is in creating shorter snapshots.

Yes. Human Condition is a thoughtful meditation, which works both as a foreground and background feature. Foreground listening is by far the best, mind, for the inner parts of Gorecki’s patchwork are fully revealed and the colours can be best appreciated. A subtle experience but a lasting and uplifting one.