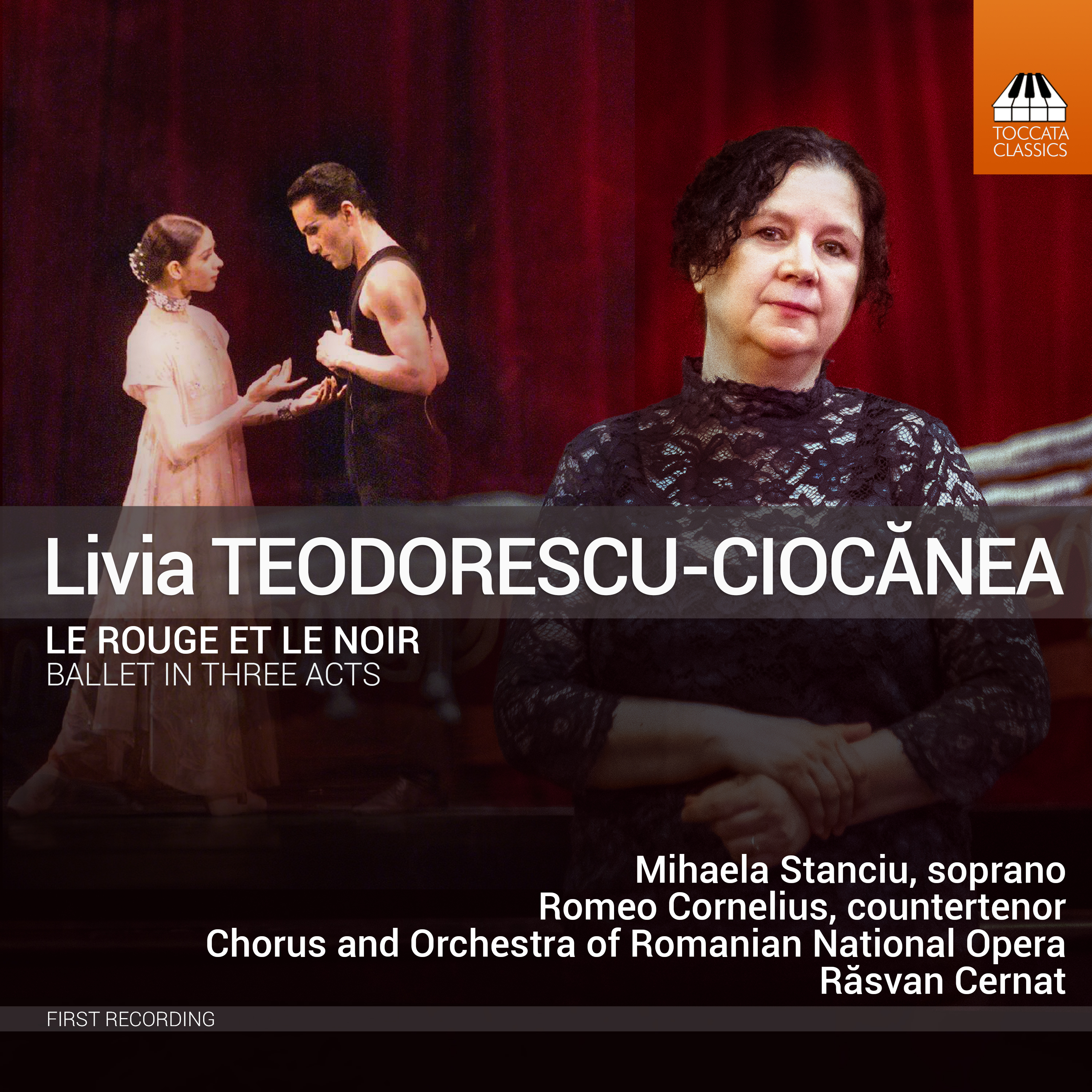 Toccata Classics here continues its coverage of Livia Teodorescu-Ciocănea (b1959) with the ballet Le rouge et le noir, whose frequently lurid scenario allows her orchestral prowess and range of invention full rein – making for a musical experience cohesive almost despite itself.

Alongside a distinguished academic career (her PhD in composition was undertaken at the University of Huddersfield), Teodorescu-Ciocănea has amassed a sizable output that ranges across all the main genres. Her music has been compared to that of Horaţiu Rădulescu and Ştefan Niculescu in its usage of ‘spectral’ elements, but its expressive character is arguably closet to that of Pascal Bentoiu with its pivoting around post-romantic and modernist traits. Appropriate, then, for a ballet score complementing its subject-matter in no uncertain terms.

In her introductory essay, the composer describes Stendhal’s novel upon which this ballet is based as a ‘‘powerful and romantic one’’; which might almost be thought euphemisms for a scenario in which histrionics are emphasized to the point of – and even beyond – overkill. All is revealed in her track-by-track synopsis, but maybe this is a score best tackled – at least on first hearing – minus the distractions of Stendhal’s narrative with its cumbersome symbolism or mostly unsympathetic protagonists; one that culminates in a disingenuously tragic outcome.

Appreciating this ballet ‘in the abstract’ is facilitated, moreover, by the theatrical immediacy of its music. Structured in three acts, framed by a prologue and epilogue, it draws the listener through the story with no inherent longueurs (the ballet initially lasted for around 95 minutes, which Teodorescu-Ciocănea has reduced to its present 75 through withdrawing the numbers ‘‘that seemed to me redundant or transitional’’). Highlights are the second half of Act Two’s first scene – a propulsive passacaglia set in the mayor’s house; the subsequent scene, with its plangent and evocative love-duet set at Vergy; the brief while potent Passion Tango in Act Three’s second scene; and the Epilogue which brings about the denouement with a fervour and a dramatic inexorability that comprehensively transcends the narrative which inspired it.

For the most part, yes. Listeners might well be advised to tackle the music straight off, rather than study the scenario beforehand. In the (understandable) absence of the visual component, this is a piece best evaluated on its own terms; without the cringing element of melodrama as derived from Stendhal, yet another of those ‘classics’ novels which has rightly been relegated to an academic footnote in history. The present performance surely presents this work to best advantage – vocalists Mihaela Stanciu and Romeo Cornelius eloquent in their contributions, and Răsven Cernat securing a visceral response from the forces of Romanian National Opera. The track-listing gives immediate access to each scene in the three acts, while Joel Crotty’s biographical outline is invaluable given the almost complete absence of material in English.

Yes, in the hope Toccata will go on to release examples of Teodorescu-Ciocănea’s orchestral and choral music – not least the oratorio Poppy Fields, her ‘in memoriam’ for those who fell in the First World War and on a scale as was largely ignored by major composers in the UK.

You can discover more about this release at the Toccata Classics website, where you can also purchase the recording. To read more about Toccata’s exploration of Teodorescu-Ciocănea’s piano music, click here