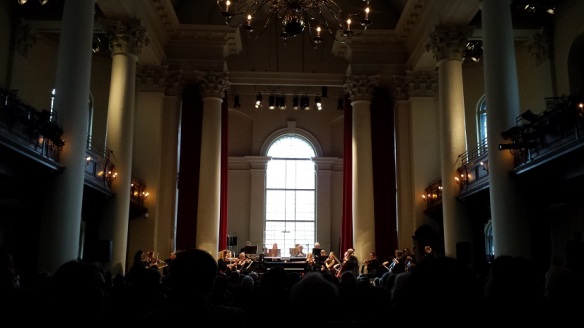 For the latest in their Mozart Explored series at St John’s Smith Square, Howard Shelley and the London Mozart Players turned their attention to the composer’s final work in the form.

It is astonishing when you pause to think that Mozart had already completed 27 piano concertos by the age of 35, quite apart from everything else he did. Even after the composition of this piece, when he was under all sorts of personal and financial pressure, he managed to write such ‘trifles’ as The Magic Flute, the Clarinet Concerto and the Requiem. So although the music here was shown to be wonderfully positive there was a twinge of sadness at a career cut so short.

Howard Shelley was the ideal guide, affable yet knowledgeable, and although his keyboard was positioned so he faced the orchestra rather than the audience this was a good move, for everyone in St John’s could see his hands at the keyboard – and as a result the music physically being made.

St John’s is a lovely venue for this music, a world apart from the incessant clamour of Parliament Square just around the corner – an oasis by the Thames. Shelley’s demeanour only aided this hour of escape, talking through the circumstances around the composition of the concerto and also getting to the nub of the main themes of each of the three movements.

And then the performance itself, which was beautifully and stylishly given. With the orchestra ideally sized, Shelley conducted them through the opening bars of the first movement before his own graceful solo part asserted itself, stressing the vocal nature of much of this music.

There was lovely interplay particularly with the woodwind, who were also a prominent feature of the second movement, which felt like an aria in Shelley’s hands. The finale, written in celebration of the onset of Spring, could have been a little misplaced given the bitterly cold wind outside, but it became a light footed and quite graceful dance, Shelley again taking the lead.

The LMP return on Thursday March 16 to turn their attention to Beethoven’s Emperor Piano concerto – and if you can make it the rewards will surely be many!