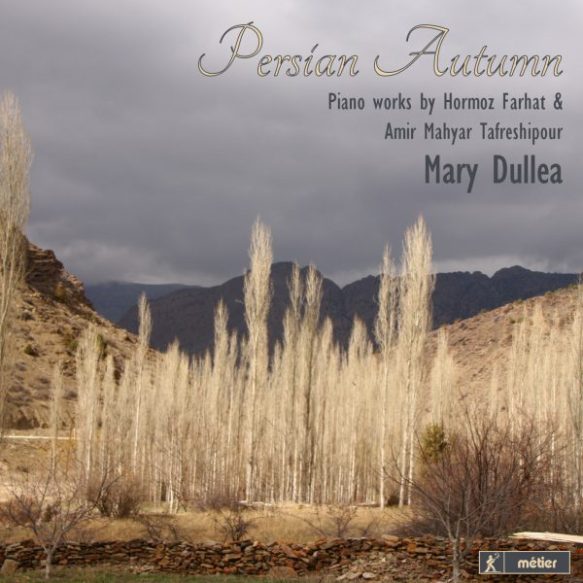 The always enterprising Mary Dullea releases an album of piano music by Iranian composers of the older and middle generations, both having been acclaimed on either side of the Atlantic for their highly contrasted yet equally imaginative amalgam of Eastern and Western sources.

Hormoz Farhat (b1928) received his musical education in the USA and has resided in Ireland over four decades. Composing in all the main genres, he has also researched extensively into the Persian modal system, whose influence is evident throughout those works of his maturity.

Premiered by pianist and composer Alexander Tcherepnin, Toccata is among Farhat’s earliest acknowledged works – its alternating declamatory and ruminative manner resulting in music whose virtuosity gained widespread attention. Farhat was fortunate in his exponents, the First Piano Sonata being premiered and advocated by his teacher Lukas Foss – doubtless attracted by its formal rigour and tensile emotional trajectory. A restive opening Allegretto is followed by a subdued if hardly serene Adagio then a Moderato that quizzically elides between scherzo and intermezzo, before the final Rondo draws on motivic elements from earlier movements in its oblique while purposeful course toward the peremptory close. Coming over a half-century later, the Second Piano Sonata is more expansive but never unfocussed in its conception. The initial Allegretto outlines without articulating a sonata design, in what feels closer to a freely unfolding fantasia, then the central Largo yields an improvisatory and often confessional aura, countered by the final Animato in waves of tension and release on the way to a pensive close.

Having pursued musical studies in Esbjerg and London, Amir Mahyar Tafreshipour (b1974) has written a significant amount of chamber and instrumental music – as well as the first harp concerto by an Iranian composer. Recently, he has turned his attention to the operatic domain.

The four pieces recorded here attest to their composer’s acute sense of evocation and formal cohesion. Yasna refers to the Zoroastrian act of worship over an intensifying span as is both hieratic and incantatory, while Pendar – a term implying ‘thought’ and which is also the title of a series of pieces for solo instruments – unfolds as though a stream of consciousness that plays on listeners’ expectations in numerous and intriguing ways. Its title meaning ‘nocturne’, Shabahang was inspired by the crashing of waves against the coasts of the west of Ireland as also the south-east of Iran; its encroaching remoteness finding contrast with the often festive spirit, tempered by more contemplative aspects, of Celebration at Pasargadae – whose outer sections finding this composer at his most emotionally outgoing and uninhibitedly virtuosic.

Yes, given the highly differentiated yet inherently personal manner by which both composers channel aspects of their heritage via overtly if never inflexibly European means. It helps that Dullea is so attuned to the musical idioms of these composers as also their technical demands.

Indeed. Sound is a little hard in more forceful or energetic passages, while remaining clear and well balanced throughout. Notes on each of these pieces are succinct but informative, and this is music which inquiring listeners and pianists alike should certainly find worth investigation.