Full marks should go to the OAE and Kings Place planning teams for this concert. Somehow they anticipated that what was required on the last day of September 2022 was a ‘mass in time of fear’ – and in doing so unwitting delivered the ideal response at the end of a week of great political uncertainty. The subtitle was given by Haydn to a substantial work better known as the Nelson Mass, so called because it was performed in the presence of Nelson and Lady Hamilton when they visited the composer at Eisenstadt in 1800.

First, though, we heard a work from the composer’s Sturm und Drang period. His Symphony no.44, the only one of his 104 in the key of E minor, has the nickname Trauer on account of the performance of its slow movement at Haydn’s funeral. It falls in the middle of a particularly rich vein of creativity in the Haydn symphony, where he was exploring less common key centres and instrumental possibilities. This performance was given by just 17 players but they gave a sound that could have been made by an orchestra double the size. They caught the dark undertones of its lean and jagged first movement, reminding us of how dramatic Haydn symphonies can be. John Butt was an embodiment of the vigorous performance, drawing the wit and dance rhythms from the Menuetto but also enjoying the relative sweetness of the trio section, with outstanding high horn playing from Ursula Paludan Monberg. The muted Adagio was beautifully done, finding the serene corners of the major key, while the finale had terrific drive, the strings digging in with gritty staccato.

A curious inclusion followed, the second movement of the choral version of Seven Last Words of our Saviour on the Cross. Concentrating on Christ’s promise to his fellow crucified prisoners that they too would see paradise, Haydn offers a vision of redemption that the four vocal soloists portrayed after a period of initial solemnity. The choir, positioned around the balcony, sang down to the audience and were ideally balanced by Butt, who was always cajoling them on to more.

He did likewise in an outstanding performance of the Nelson Mass, which was compelling from first note to last. Described by no less than Haydn scholar HC Robbins Landon as ‘arguably his greatest composition’, it began with a dramatic Kyrie, laying an immediate sense of occasion. With brass and timpani alongside the 17-strong chorus on the balcony, there was fear and tumult in the music, which reached an apex in the Benedictus, an extraordinary passage of writing for the time. Soprano Sofie Ticciati was a subtly commanding presence, especially in this section, and she had sterling harmonic support from fine mezzo-soprano Bethany Horak-Hallett, who came into her own with a terrific solo at the start of the Agnus Dei. Hugo Hymas and Robert Davies were excellent too, the latter’s burnished bass tones matching the sweet violins in the Qui tollis section of the Gloria.

The choir sang with composure but with great passion, too, mirroring the input of their conductor, who had the measure of the Kings Place acoustic. This gave the big numbers – Gloria, Credo and Agnus Dei especially – the reverberation they needed at the end to follow their emphatic conclusions. By the end of the latter movement the darkness was completely vanquished, Haydn’s firm beliefs given their surest possible foundation. This was an outstanding concert, and a memorable contribution to the Voices Unwrapped series at Kings Place. Here the voices were not just unwrapped, they were ringing in the venue’s recesses long after the audience had departed.

Back in its home venue following several years’ renovation and what could more appropriate for University College Opera than this first UK staging of Libuše, Smetana‘s ‘festival opera’ whose premiere the composer held back for almost a decade until the opening of Prague’s National Theatre in 1881? Indeed, other than a semi-staged presentation at the Edinburgh Festival two decades ago, this monument to national aspiration had never even been performed in the UK – hence making University College Opera’s production a further feather in the cap of this enterprising organisation.

An opera so centred on Czech legend was never likely to ‘translate’ easily in cultural terms. Cecilia Stinton‘s situating of it in a “futuristic City of London” is a plausible concept which rather misfires: the interplay between Medieval myth and post-modern setting rarely seems more than a hopeful compromise; in addition, the functional quality of Holly Muir‘s designs and Alex Forey’s effective if relatively unadventurous lighting tends to reinforced the static nature of Smetana’s music, though Ester Rudhart‘s choreography certainly enlivened the crowd scenes. 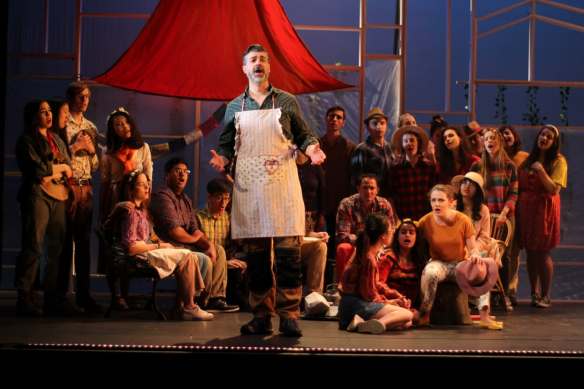 The cast, however, could hardly be faulted for insight or commitment. Kirstin Sharpin found imperiousness but also humanity in the title-role; a rounded and empathetic portrayal abetted by her vocal eloquence – not least in the prophecy of fraught yet glorious times ahead for the Czech nation that forms an apotheosis of truly Wagnerian grandeur. As her consort Přemysl, Robert Davies ably conveyed the wisdom and humanity of one whose idyllic rural existence (here made into an anarcho-socialist holiday camp) is unaffected by his sudden regal status.

As Krasava, Eve Daniell gave a magnetic assumption of one whose feminine guile provokes the initial crisis yet also eventually aids reconciliation through her strength of character. John Mackenzie brought real authority to Lutobor, with James Quilligan and Ben Harding equally inside their respectively anguished and bemused roles as the brothers Chrudoš and St’áhlav. Ananya Samuel conveyed the right degree of agitation as their put-upon sister Radmilla, and William Bennett made the most of his brief though strategic cameo as the envoy Radovan. 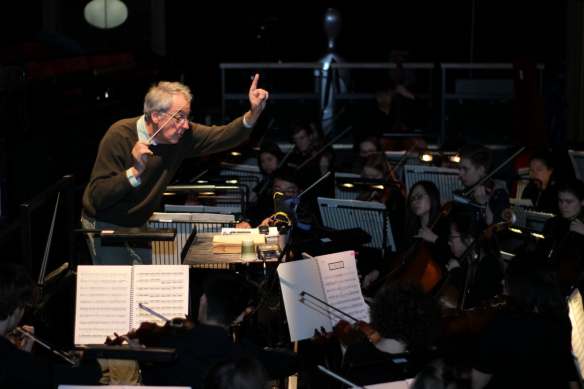 A further enhancement was the decision to sing this opera in Czech – which may have caused passing uncertainty for the UCL Symphony Chorus, though without detriment to their energy or zeal. A pity the UCL Symphony Orchestra’s playing was sometimes undermined by issues of intonation or ensemble – but this was, after all, the first night and any such failings should hopefully be ironed out over the remaining three performances. Charles Peebles conducted with a tangible conviction right across this opulent and sprawling canvas.

All in all, this was a flawed but capable and, certainly in vocal terms, distinguished rendering of an opera that is unlikely to receive further staging in the UK any time soon. Just over three decades after its memorable production of Smetana’s The Devil’s Wall, University College Opera has once again come to the aid of a composer whose contribution to mid-nineteenth century opera rarely receives its due. In vindicating the viability of Libuše as a theatrical and, above all, musical entity, it could not have launched this new phase of its existence more potently.

There are two more opportunities to see Libuše, on Friday 22 and Saturday 23 March. For more information head to the University College website

The only available recording of Libuše, conducted by František Jílek, can be heard on Spotify below: