The 13th English Music Festival got off to an impressive start this evening, with Martin Yates presiding over the BBC Concert Orchestra for a substantial and wide-ranging programme that brought together the hitherto unknown and the relatively familiar in appropriate EMF fashion.

Who else would provide a platform for a first public performance of the Violin Concerto in D major that Stanford wrote at Leipzig in his mid-20s but which, despite the seeming approval of Joachim, remained unheard before being recorded two years ago. Admittedly the first movement rather outstays its welcome, the themes lacking memorability and a solo part not ideally contrasted with the orchestra, but the slow Intermezzo has an appealing poise; its cadenza artfully made an extended transition into the final Rondo (a procedure likely taken over from Wieniawski’s Second Concerto – the model in several respects), its winsome second theme brought back as a lingering coda prior to the closing flourish. Sergey Levitin proved an able and sympathetic soloist in a piece which, whatever its stylistic limitations, was certainly worth rehabilitating.

As too was the incidental music Vaughan Williams devised for Maurice Maeterlinck’s play The Blue Bird, idiomatically orchestrated from the piano score by Yates. This is essentially a ballet (or rather mime) sequence for the end of the first act, its series of thematically related dances striking a fantastical note such as the composer tellingly (if unexpectedly?) conveys. It may well have proved too ambitious in its original context though makes for a lively and imaginative suite, into whose whimsical spirit the BBCCO entered with evident enjoyment.

Malcolm Arnold’s Serenade exemplifies this composer’s early maturity with its pert melodic writing, harmonic ambiguity and rhythmic impetus. A Song before Sunrise is less often heard than other Delius miniatures, but its ruminative mood – barely ruffled by passing shadows, is no less characteristic. It could not have been more different from Lord Berners’s Portsmouth Point, redolent of early Prokofiev in its mechanistic aggression that, if it lacks the ebullience of Walton’s later overture, still packs an uninhibited punch when presented as a curtain-raiser. 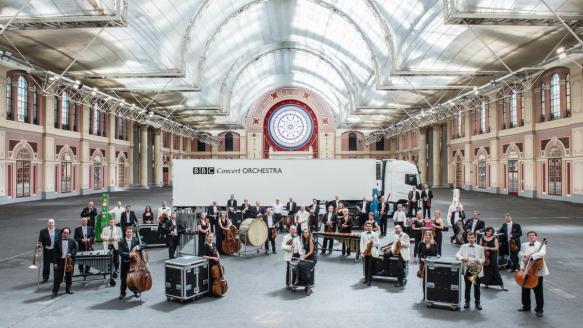 The concert ended with its most intriguing item. Long considered a miniaturist (at least in his expressive scope), Robin Milford was not lacking in ambition – as reinforced by his Second Symphony (so designated following the rediscovery of its predecessor from six years earlier), admired by Vaughan Williams but only now receiving its first complete performance. Its four movements ostensibly reflect classical archetypes, but the first of these modulates ever more stealthily as it unfolds, while the scherzo’s latter trio unexpectedly opens-out the expressive range. The highlight is undoubtedly a slow movement of sustained and cumulative emotional depth, closer to Nielsen than Sibelius in tonal follow-through; after which, the (intentionally?) concise finale barely manages to provide a decisive resolution without seeming perfunctory.

Not in doubt was the commitment of the BBCCO and Yates in realizing this dark horse among British inter-war symphonies. A fitting end to an absorbing event: good to hear that orchestra and conductor will be returning for the 14th EMF – scheduled for May 20th–22nd next year.

For more Robin Milford this album on Toccata Classics provides great insight into his writing for chamber music forces:

Meanwhile the following playlist includes the Malcolm Arnold and Delius works, the more familiar version of Portsmouth Point by Sir William Walton, and Arnold’s Symphony no.1: