In the words of the Royal Opera House:

Contrast is the essence of Giacomo Puccini’s operatic triptych, Il trittico. The one-act works that form the trilogy – Il tabarro, Suor Angelica and Gianni Schicchi – range from gritty melodrama to life-affirming comedy. While each opera stands alone, the three come together to create a sense of a complete event, rich in textures and musical forms.

Director Richard Jones matches the eclectic range of Puccini’s music in a production of great verve and invention, moving from the grimy banks of the Seine to a children’s hospital and from there to a garish apartment in 1950s Italy.

You can stream the operatic trilogy from the Royal Opera House website here, up until 19 June 2020. 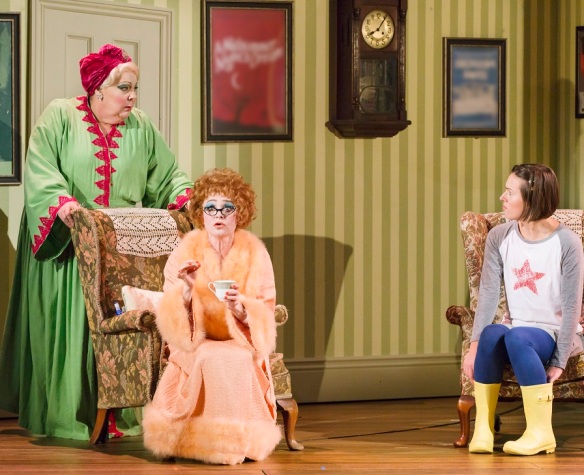 Opera in Two Acts – Music by Mark-Anthony Turnage; Libretto by Rory Mullarkey, after the novella by Neil Gaiman; Sung in English (no surtitles)

From the streetwise allegory of Greek, through the traumas of war in The Silver Tassie and tawdry decadence of Anna Nicole: Mark-Anthony Turnage has always been unequivocal in his choice of topics for dramatic treatment, and Coraline ultimately proves no exception.

Its libretto is expertly derived by Rory Mullarky from a novella by fashionable author Neil Gaiman, but what really makes this opera succeed as a theatrical concept is the equilibrium secured between those real and imaginary worlds being traversed by the eponymous heroine in terms of their narrative symmetry and of musical evolution. In these respects, the piece is something of a breakthrough for Turnage – enhanced with an undemonstrative effectiveness of staging which makes up for in scenic integration what it might lack in visual immediacy.

Utilizing the ostensibly inflexible space of Barbican Theatre, Aletta Collins has fashioned a production which underlines the scenario’s uneasy pivoting between fairy-tale and allegory; enabling both characters and settings to appear unexceptionally human while indicative of something ‘beyond’. Her achieving this has been abetted by the engaging and never unduly tricksy designs of Giles Cadle, functional yet never utilitarian costumes by Gabrielle Dalton and effective while unfussy lighting from Matt Haskins. It might be argued the Other House into which Coraline ventures is insufficiently distinct (eye-buttons aside!) from the real one, but such visual consistency serves to unify dramatic action across and between acts; and so ensure an equivocation between environs as points up the underlying moral more explicitly.

These visual qualities are complemented by vocal ones. It might not call for virtuoso singing per se, but Coraline does require tightness of ensemble such as the present cast has in spades. Mary Bevan makes a sympathetic though never cutesy impression in the title-role, gaining in expressive conviction as the drama unfolds, while Kitty Whatley arguably steals the show in her assumption of the mothers. That of the fathers may be more simply drawn, but Alexander Robin Baker is likable and engaging; no less than Harry Nicoll as hapless inventor Mr Bobo. Gillian Keith and Francis McCafferty complement each other ideally as faded thespians Miss Spink and Miss Forcible; the former giving a whimsical cameo as the First Ghost Child, with her companions represented in equally touching fashion by Nicoll and Dominic Sedgewick.

Concerning Turnage’s music, it might easily be dismissed as effective in underpinning stage-action while lacking the memorability and individuality of his best scores. That said, there are numerous stylistic traits consistently in evidence – not least the pungent rhythmic unisons and harmonic astringency such as this composer has made his own. It helps that the score is given with such audible conviction by Britten Sinfonia, increasingly familiar in the opera-pit, and is conducted by Sian Edwards with an appropriate amalgam of incisiveness and dramatic focus.

Whatever else, Coraline secured an evidently appreciative response from adults and children alike, for whom this drama’s more traditional aspects seemed not to inhibit their enjoyment. Not a mesmeric or revelatory night at the opera, perhaps, but an enjoyable and appealing one.

Further performances of Coraline take place at the Barbican Theatre on April 3, 4, 5 & 7 at 7pm and April 7 at 2pm. For more details visit the Barbican and Royal Opera House websites

Productions of Madama Butterfly at the Royal Opera are notable for their longevity. That by Robert Helpmann held the stage over three decades until 1983, while the current production from Moshe Leiser and Patrice Caurier has now reached its fifth revival in barely 14 years.

Notions of the balance between Japanese tradition and American imperialism have inevitably changed much since Puccini’s day (though aren’t the music’s frequent allusions to The Star-Spangled Banner more than a little ironic?), but this Leiser/Caurier production continues to strike a plausible balance between social comment and an archetypal Japanoise which skirts without descending to cliché. Enhanced by Christian Fenouillat’s plain though unfussy sets, Agostino Cavalca’s unexceptional if appropriate costumes and Christophe Forey’s subdued yet pertinent lighting (the silhouette strategy paying dividends in Act Three), it makes for a presentation which avoids subversion while also underlining those provocative elements in Puccini’s music too often sacrificed when his score is rendered as a sentimental tear-jerker.

Vocally this ‘second cast’ is anything but second rate. Reprising the role from 2015, Ana María Martínez brings ardour and eloquence aplenty to Cio-Cio San; besides an edginess to her sending-up of Yamadori’s pretensions in Act Two then a deft pivoting between elation and desolation, before the fateful denouement, which only adds to the range of a character made wise beyond her years. With notable Royal Opera roles in Mozart and Verdi already behind her, Martínez is clearly an artist as versatile vocally as she is arresting dramatically.

As also is Romanian tenor Teodor Ilincai, previously heard as Rodolfo at the ROH and here harnessing his natural richness and resonance of tone to a portrayal of Pinkerton that, if not making him exactly sympathetic, contextualizes his shortcomings to a degree that avoids the callous or mean-spirited. His plangent Act Three aria is the more affecting for its absence of false emoting, while his vocal elegance elsewhere works admirably in those numerous duets which throw into relief his shortcomings – resulting in a striking and resourceful assumption.

The secondary roles are hardly less successful, not least Scott Hendricks as Sharpless whose desire to do the right thing is always outdone by his inability – even unwillingness – to alter the course of events. Elizabeth DeShong exudes warmth and compassion as Suzuki, and her masterly acting makes appreciably more of this part on-stage than is evident from the score alone. Carlo Bosi is a cunning and deceitful Goro, Jeremy White summons all his vocal and dramatic presence for a riveting cameo as the Bonze, while Yuriy Yurchuk brings the right sardonic touch to that of Yamadori. Emily Edmonds does what she can with the overly brief role of Kate Pinkerton, while Gyula Nagy is a properly portentous Imperial Commissioner. The roles of Butterfly’s family seem as well-contrasted in vocal as they are in visual terms.

A further plus is Renato Balsadonna’s conducting, superbly geared to this opera’s emotional contrasts and dramatic pacing while securing a committed response from the ROH orchestra. It sets the seal on this revival of a production by no means at the end of its natural life-span.