Messages old and new – the Elias Quartet give an Emily Howard world premiere, and are then joined by Simon Crawford Phillips for Schumann’s Piano Quintet 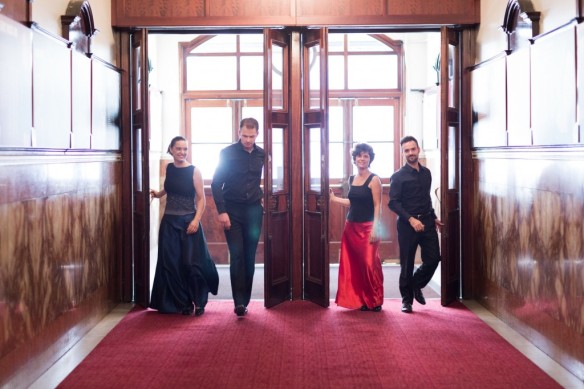 on the iPlayer until 9 June

In case you cannot hear the broadcast, here is a link to a recording of the Schumann (Howard’s pieces is a world premiere so not yet recorded). The Schumann is played here by Sviatoslav Richter and the Borodin String Quartet:

Emily Howard’s new piece Afference, a substantial work for string quartet, is based on a physiological term to describe the way in which the brain processes our experiences of the world. Howard herself has a degree in maths and computer science, something that might lead an audience to expect a very calculated approach to composing music. This is not entirely the case though, as the biography on Howard’s own website suggests.

Afference appears to be her first work for string quartet, commissioned by the Elias Quartet themselves. It joins a canon of pieces that range from large-scale orchestral works (Axon and a symphony called Magnetite) to smaller scale compositions for clarinet and piano.

Schumann’s Piano Quintet was written in 1842, when he was still giddy with love for wife Clara. She was the dedicatee of this work, but as the BBC Radio 3 announcer Georgia Mann details it was first performed with none other than the composer Felix Mendelssohn at the piano.

A fine concert, with concentrated playing from the Elias Quartet of what is on two listens an engaging new work for string quartet. Emily Howard writes in a distinctive style that the Elias Quartet understand, and the colours she achieves are consistently interesting and imaginative. It helps to know the program for the piece, as there do indeed seem to be a lot of messages transmitted in 22 minutes. Some of them are very nervy, though ultimately the piece feels of a positive nature.

The Schumann receives an excellent performance, the happiness of the first, third and final movements a joy to behold – while the second movement, if a tiny bit slow in its central section perhaps, is uneasy and in need of consolation this ultimately provides. Simon Crawford-Phillips plays brilliantly, with authority but also ensuring the strings are heard at all times. His nimble finger work in the third movement scherzo is especially impressive.

1:20 – a busy start with all four instruments playing frenetically then cuts to a section with a very small voice, doing battle with the quartet.

5:55 – the instruments all take a melodic line that uses portamento (sliding from one pitch to another) before a more intimate phrase starts to dominate. At this point the instruments are close together in pitch.

8:09 – a much slower section, with an intense violin pitch that grows into what sounds like a sorrowful lament, while the other three instruments give softly breathed harmonies. This leads on to some feverish activity, Howard’s nervous messages transmitted at great intensity.

13:17 – As the second movement starts there is a large gap between the instruments – violins on high and cello down below. The lack of a key centre brings to mind some of the quartet writing of Schoenberg, though Howard’s writing has more pitch-related implications in the cello’s continual return to its low ‘D’.

16:50 – a striking passage for violin with upwards phrases, in which Howard seems to be reaching for higher plains

18:51 – the instruments stick closer together again, but at 19:53 the violin shoots out a much higher phrase. The harmonies still make the music sound quite uneasy, as if in a state of dread.

22:20 – a piercing line on the violin returns to the pitch of D, before the rest of the quartet finish the piece with a short series of comments.

26:23 – the first movement begins with a wonderfully positive outpouring of music from piano and strings together. The theme itself is a surprisingly catchy one

27:35 – a lovely tune makes itself known on the cello, Schumann at his most romantic with the music flowing beautifully onwards. This tune is then picked up with a counter melody from the violin.

32:03 – now in the centre of the development section, the music gets more turbulent, the piano lines swirling around those of the string quartet, but then we switch to a triumphant reprise of the opening music at 32:45.

35:33 – the subdued second movement begins. This is a form of funeral march and it has a halting tune, played by both strings and piano with short notes. This is complemented by a much sweeter episode of music that begins at 37:19, still in the spirit of remembrance but with a positive approach. The sombre first theme returns once again at 38:56.

40:10 – a faster episode begins, led by the piano, the strings with much heavier lines alongside – but still the tune persists from the viola at 41:00, picked up by the violin – and the sweeter theme also makes a reappearance (41:49).

44:16 – the third movement, a Scherzo, begins with fizzing interplay led by the piano. Schumann again finds music of great positivity and energy. At 45:34 a second section begins, in the far-removed key of F sharp major, before the main scherzo returns with just as much irrepressible energy at 46:16. At 46:58 a new section is introduced, again with plenty of energy! The main theme returns at 48:02, carrying through to an emphatic finish at 48:57.

49:04 – the last of the four movements begins, and again the energy levels are up – though here we begin in a minor key that briefly recalls the second movement march. Quickly the music moves to E flat major – the ‘home’ key of the piece. The music then becomes more reserved and secretive.

51:24 – the first theme comes back, though the music is still in a minor key and still feels a long way from ‘home’. Gradually though the music gets greater presence in the ‘home’ key, and by the time we get to 54:16 it is rooted here, and sweeps to a decisive finish by way of a fugue, instigated by the piano at 54:41 and rounding off at 56:28.

Following the contrasting nature of the two pieces in this concert, the suggested further listening looks to progress from the Howard with Schoenberg’s String Quartet no.2. This famously has a last movement that sets the text ‘I feel the air from another planet…’, sung by a soprano and said to consciously signal the composer’s move away from writing in a particular key (tonality). Here the words are sung by Susan Narucki, in conjunction with the Schoenberg Quartet.

After the Schumann a rewarding next port of call is the Piano Quintet by Dvořák, his second in the form – and once again played by Sviatoslav Richter and the Borodin Quartet. The playlist can be found on Spotify here: