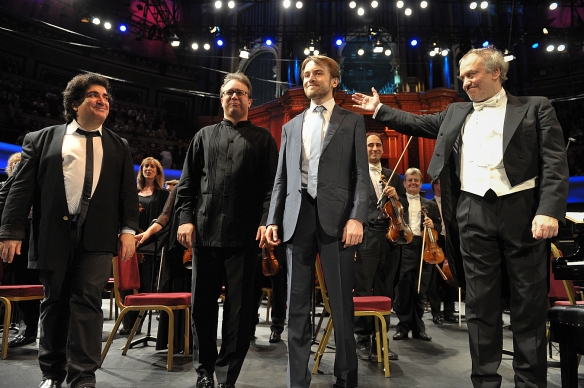 Pianists Sergei Babayan, Alexei Volodin and Daniil Trifonov take a bow alongside conductor Valery Gergiev after their performance of all five Prokofiev Piano Concertos with the London Symphony Orchestra at the Royal Albert Hall on Tuesday 28 July. Photo: Chris Christodoulou

With Leif Ove Andsnes finishing his cycle of Beethoven’s five piano concertos the previous night, it seemed an odd decision by the Proms to embark on another cycle of five from one composer, all in a single night. Yet Valery Gergiev, the London Symphony Orchestra and a trio of fiendishly talented Russian pianists proved us doubters couldn’t have been more wrong.

Prokofiev’s piano concertos vary greatly in popularity, so much so that nos. 4 & 5 were receiving their first Proms performances – incredible for works now 83 years old! They embody the composer’s relative economy, his refusal to take himself too seriously and his use of the piano not just as a purveyor of bittersweet melody but as a percussive instrument too.

We began with the impudent Piano Concerto no.1, an often outrageous piece prone to bouts of cheeky sarcasm and unexpected charm:

Daniil Trifonov played this piece superbly, exaggerating Prokofiev’s mischievous nature in a way the composer would surely have enjoyed. Gergiev too reminded us why he remains a peerless conductor in this repertoire, coaxing previously unheard detail and colour from the orchestra. If you listen to the clip above, you will agree it is a relative riot from start to finish!

This detail could be heard again in the cool, luminous slow sections of the Piano Concerto no.2, where Sergei Babayan lulled us into a false sense of security with a sombre opening section. Gradually – like Rachmaninov in his Piano Concerto no.2 before him – Prokofiev moved through the gears, the climax a titanic cadenza (a showy solo episode, cue to follow) that Babayan – Trifonov’s teacher, incidentally – played majestically, bringing goose bumps when the bright lights of the orchestra returned.

The Second is a contrary piece, following these bold romantic gestures with a grotesque second movement march owing much to Musorsgky (cue to follow), before a more elegiac third movement and a finale that gathers itself for showy virtuosity again, shown in the terrific closing pages. The house was brought down once again!

Trifonov returned to make it three cracking performances out of three with a sparkling account of the Third, revelling in the different characters Prokofiev uses for the central Theme & Variations (cue to follow). The sleights of hand in the outer movements were dizzying, the pianist a study of concentration as his quick fingers deceived the eye. Gergiev again found insight to the colours of the second movement that normally evade the ear.

And so into the relative unknown for the Fourth, a work commissioned by the fearsome left handed pianist Paul Wittgenstein – and ultimately rejected. His dissatisfaction relegated the piece to an also ran in Prokofiev’s output, but as Alexei Volodin proved here, that tag is undeserved.

This holds especially for the slow movement, which points towards the composer’s ballets, particularly Romeo and Juliet, which was close at hand in 1931. Indeed a forebear of the music for Juliet the Young Girl can be heard in the fourth movement, which scampered off the leash in this performance before disappearing in a puff of air.

Sergei Babayan returned for an imposing performance of the Fifth and final concerto, a convincing account that made a mockery of the work’s non-appearance at the Royal Albert Hall. With melodic lines that dipped low before leaping up high he was never still, rising to the technical challenges while applying a lightness of touch needed to dilute the heavier, percussive moments.

Once again Gergiev and the London Symphony Orchestra, whose stamina was especially praiseworthy, propelled the third movement like a machine testing its upper speed limit, while again the slow movement – this time placed four of five – drew a lump to the throat before Prokofiev characteristically girded himself for an emphatic finish.

On the face of it this could have been an ill-judged experiment, especially with the two least-known works placed last. But the audience and social media reaction proved it to be anything but, for the listeners thoroughly enjoyed this colourful and often theatrical riot of ever-changing moods. While the piano will no doubt have needed some tender loving care at the end of it, Prokofiev’s invigorating music emerged defiant.