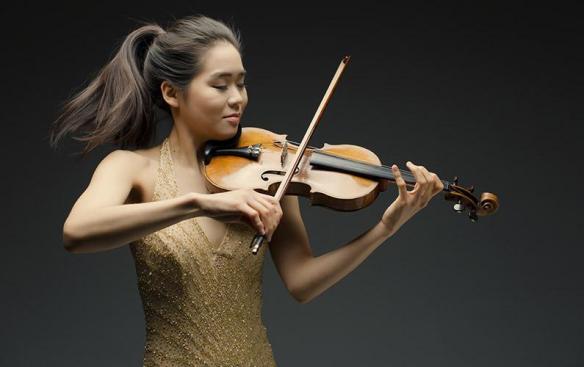 Audio (open in a new window)

In case you are not able to hear the radio broadcast, here is a link to a playlist of the music played. Esther Yoo has not recorded any of it in violin and piano form, so substitute versions have been used:

Sibelius wrote a great deal of music for the violin but other than the famous Violin Concerto, very little of it is heard regularly these days. It is therefore a refreshing change to see the E major Sonatina listed. A relatively short work, it helped Sibelius through a particularly testing time with his finances.

Mendelssohn has a number of parallels with Sibelius where the violin is concerned, writing a famous Violin Concerto that gets played at the expense of pretty much everything else. Once again in this case there are works for violin and piano, and the Violin Sonata chosen for this concert is the most substantial, completed in 1838. For some unexplained reason it was not published in Mendelssohn’s lifetime, and was resurrected by Yehudi Menuhin in the 1950s.

Esther Yoo begins the concert alone, with Bach’s famous Chaconne – taken from his Solo Violin Partita no.2. It is a landmark in solo instrument writing, a tour de force of 64 different versions of the same sequence of chords that Bach develops with ever greater virtuosity.

She complements the Sibelius, meanwhile, with a short piece – an excerpt of a love scene from Glazunov’s ballet Raymonda.

A refreshing program from Esther Yoo, who has just recorded a very well-received disc of Sibelius and Glazunov with Vladimir Ashkenazy.

It was particularly good to report a rare outing for the Sibelius Sonatina, a piece with energy and fresh invention that definitely sweeps away the cobwebs! Yoo and her musical partner Zhang Zuo (known as ‘Zee-Zee’) gave a performance full of enthusiasm and energy, giving Sibelius’ melodies a real shot in the arm. Prior to this Yoo had greatly impressed with her account of the Bach Chaconne, a deliberately slow and careful start gathering in pace and intensity, taking the fearsome technical challenges in her stride.

Glazunov’s Grand Adagio made a fitting complement to the Sibelius, invested with suitable passion, but the real discovery was the Mendelssohn, a piece of great craftsmanship and, in the slow movement, a depth of feeling unusual even for him. The two performers had great chemistry here and clearly enjoyed their interactions through the faster music, taking time in the slow movement to let the hymn-like passage sing.

An excellent concert concluded with a Korean folksong arranged for violin and piano, played with delicacy and then great gusto!

1:28 – the violin begins with a grand statement of a chord sequence which it then proceeds to spin out over 64 variations, reaching great intensity in the string crossing around 7:30. The variations are set mostly in the minor key but move to the major at 9:15. Bach gives an enormous variety of colour, speed, attack, repose and musicality, starting relatively slowly but moving to passages of increasing difficulty and intensity, notably the string-crossing passage mentioned above, but this is also one of his most profound pieces of music when interpreted well. The music turns back to the minor key with impressive dramatic effect.

Bach often asks for the violin to employ ‘multiple stopping’; that is, playing more than one note at a time – which means the music can sound as though it is in many parts, despite still being played on the one instrument.

18:49 – a bold start from Sibelius, with the colour from the piano recognisably his. The grand introduction cuts to a quicker theme at 19:30 which suggests the outdoors. The music trips along at quite a pace – as so often Sibelius suggesting quick movement in his music. It also ends with a typical lack of fuss.

22:25 – the thoughtful second movement starts to spread its wings with the emergence of a rather beautiful melody from the violin.

27:03 – a broad melody on the lower register of the violin restores a grand air to the piece, though soon the violin twists upwards. The music gets faster again, returning us to the spirit of the first movement, with energy and grace in equal measure. Up to the end it becomes increasingly breathless, Sibelius throwing in a surprisingly light finish.

31:05 – as you might expect from a declaration of love in a Russian ballet, this is deeply passionate music, with a melody tailor made for the violin. With long phrases and sweeping gestures the music swoons. The violin reaches for the heights around 34:35, before sinking gracefully into a soft coda.

36:47 – it is difficult to understand why Mendelssohn did not publish his Violin Sonata when it starts as brightly as it does in this performance. A distinctive theme leads to close interplay between violin and piano. This being Mendelssohn there is a typically busy piano part, but there is a particularly nice, spring-like passage around 40:00 where the music slows and the composer’s lyrical side comes out.

45:38 – the slow movement is an unexpected treat, one of Mendelssohn’s most searching emotionally. It begins with a solemn statement on the piano, joined by the violin in

52:40 – a typically brisk Mendelssohn finale, the violin scampering off with the piano in hot pursuit. Initially there is barely room for breath, right up until a contrasting slower section.

Yoo’s new disc would seem the ideal place to go next, containing Glazunov’s Violin Concerto as well as the one by Sibelius. It has been very well received and can be heard here:

Meanwhile you can watch a preview of the disc here: