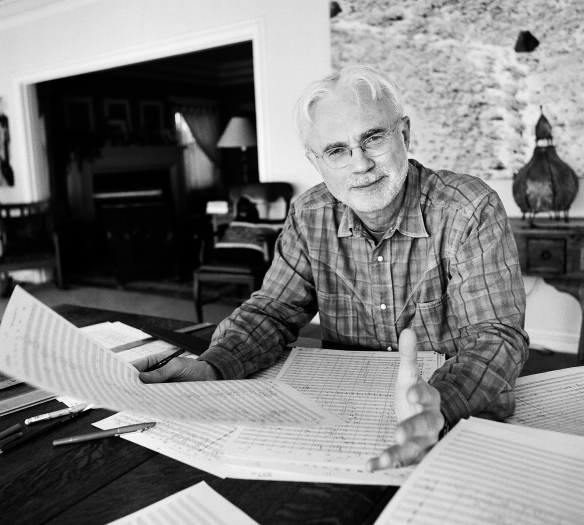 Those minimalists – they certainly have some staying power! The holy trinity of this much-loved form of music – Steve Reich, Philip Glass and John Adams – have notched up 230 years on the planet between them. Reich and Glass, both 80, have had their moment in the spotlight, so it’s now the turn of youngster Adams – a mere 70 years old today – to shine.

Like Steve Reich, he works in a style where the musical ideas get progressively developed, whereas Glass – in his later years at least – is much more repetitive. Like Glass, however, Adams has written more for the stage, completing several large-scale operas. He is also capable of scaling down, with string quartets and piano pieces also part of his output.

Here, then, are ten pieces of Adams, selected from personal experience in order of discovery, with the aim of getting the feet tapping and the mind racing!

Probably the best known of Adams’ pieces, this is a tour de force for orchestra – and apparently a nightmare to conduct in terms of getting the rhythms clear! Thrills and spills await…

This is the piece where the influence of Sibelius in John Adams’ music really shines through. El Dorado is one of his very best ‘through composed’ pieces – that is it relies much more on development than repetition. Both movements start mysteriously, with murmurings throughout the orchestra, but gradually generate an impressive power when moving towards their closing section, especially in the case of the second, Soledades.

To appreciate the full impact you definitely need to hear the whole piece.

Shaker Loops appeared in a definitive Philips recording from the San Francisco Symphony and Edo de Waart in 1986. It works equally well in its original scoring for seven string players, one per part. Once the shimmers – aka ‘Shakers’, start the mind is instantly transported.

An attractive, slightly bluesy set of dances where it feels like Adams is having fun, together with the Kronos Quartet, who commissioned it.

Make sure the room is quiet and the neighbours have gone out. Turn the stereo right up, and lose yourself to the opening moments of Harmonium, where voices and instruments blend in to one.

This is a truly magical piece that demonstrates Adams’ ability to write for large vocal and orchestral forces:

A terrific concert opener this, punchy and upbeat from the off – with plenty of percussive intent, not to mention the swirling harps and busy woodwind and string lines. One of Adam’s most energetic works, it is written in tribute to Nicolas Slonimsky, a composer and critic who had ‘wit and hyper-energetic activity’ – hence the mood of the piece!

Jazz plays an intriguing if sometimes understated part in Adams’ music, but in Lollapalooza braying brass and woodwind instruments and syncopations are much in evidence. The piece is actually based on the rhythm made by the word, ‘loll-a-pal-ooz-a’, and develops with rolling timpani:

Never one to shy away from controversial topics, Adams wrote an opera based on the creation of the atomic bomb, and more specifically on its creator, J.Robert Oppenheimer. He also documented the effect on the workers and the region where the bomb was tested, Los Alamos.

The end of the first act includes an aria, Batter my heart, sung by Oppenheimer and setting the words of John Donne. It arrives on the eve of the text explosion. Adams said to New Yorker critic Alex Ross, “That music just sort of fluttered down and landed on my desk one day. Part of me said, ‘No, you can’t do that,’ and the other half said, ‘That’s it, go ahead and do it.’ Afterward, I realized the reason it was right. Naming the site after a John Donne sonnet was itself an archaic gesture. Oppenheimer was always referring back to ancient things, summing up his state through very dignified forms.”

It is worth reading this when you listen to the powerful music! Adams made a Symphony of the opera, attached to the Spotify playlist.

“City Noir is a symphony inspired by the peculiar ambience and mood of Los Angeles ‘noir’ films, especially those produced in the late forties and early fifties”, writes Adams. “My music is an homage not necessarily to the film music of that period but rather to the overall aesthetic of the era. This symphony becomes the third in a triptych of orchestral works that have as their theme the California experience, its landscape and its culture.

Below is the third of its three movements, Boulevard Night powerful and surging:

One of Adams’ most successful stage productions, El Nino is classed as an ‘opera-oratorio’ that tells the Christmas story. Once again Peter Sellers was the stage collaborator, including film and dance in the production. Here is an excerpt with the stellar cast, including Dawn Upshaw, Lorraine Hunt Lieberson and Willard White: