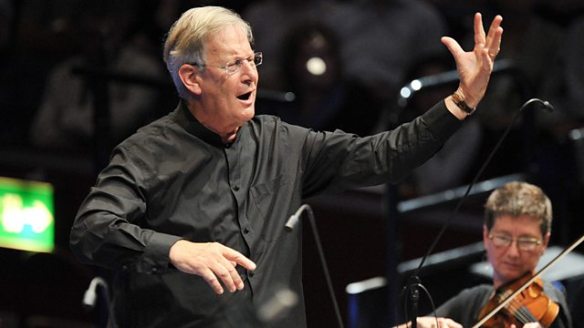 After the earlier evening headiness of John Adams’ Naïve and Sentimental Music from the Philharmonia, it was quite a stylistic shift to the night’s second Prom, which began with three canzonas / hymns of Heinrich Schütz, written some 400 years ago.

Yet as the ear gradually adjusted and the members of the Monteverdi Choir and English Baroque Soloists quickly found their level, it was clear we were listening to something quite special. Under the fastidious but loving direction of Sir John Eliot Gardiner, an old hand at these scores, Schütz’s own minimalism came to light, helping the transition from first Prom to second. The choir were carefully positioned and instrumental soloists stood where possible for their contributions, an effective technique that spotlit them for the audience but also ensured the Royal Albert Hall acoustic was keenly observed.

The second cantata, Eine feste Burg ist unser Gott, became the focus of the evening, Bach’s Lutheran cantata a cornerstone not just of his sacred compositions but of Baroque music and the Reformation in general. Gardiner took every opportunity to depict the ‘mighty fortress’, whether through the strength of the choral sound or the meaty orchestral textures, capped at the bottom end by the extraordinarily satisfying rasp on Stephen Saunders’ bass sackbut, an ancestor of the trombone. Brought to the front for the Prommers’ benefit, it was a wonderful thing to witness.

This was just the tip of the iceberg though. One of the great assets of the Monteverdi Choir is that its members are all potential soloists, making it a great team of individuals. Soprano Miriam Allan and bass Robert Davies dueted in the Aria and Chorale, and complemented each other very nicely, then tenor Hugo Hymas sang beautifully for the Recitative, while Mobley (above) once again impressed with his passionate and full-bodied tones in a duet with the tenor. The orchestra were once again on top form, though this time oboist Leo Duarte was keenly in focus, moving between the conventional wooden oboe, an oboe d’amore and an oboe di caccia (which looks rather like a banana!) with great dexterity and flair.

The chorus were impeccable with their diction and ensemble, and Bach’s music had that life-giving energy that comes across in successful performances such as this. Eliot Gardiner has written a whole book (Music In The Castle of Heaven) on his love of Bach’s music, and listening to his charges here was akin to standing on the turrets of that building, faces turned skywards. It really was that enlightening.