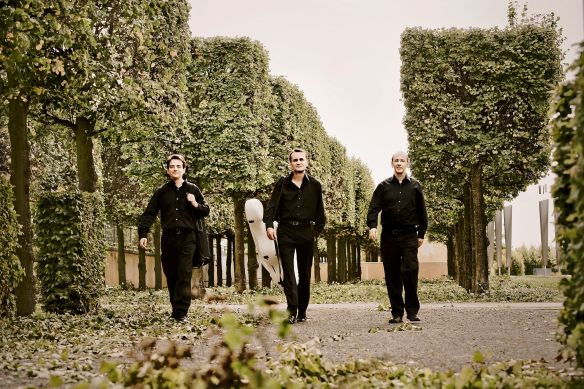 In recent years the piano trio format – piano, violin and cello – has suffered a little in live performance, due to the retirement of the magnificent Beaux Arts and Florestan Trios, arguably the two best established groups in the form.

That effectively promotes the Trio Jean Paul to the forefront of the established piano trios, and their performing chemistry, built over two decades, was there for all to see in this BBC Radio 3 Lunchtime Concert.

They began with Haydn, godfather of the piano trio, who effectively introduced the form with his 30 or so works for the combination. At this point in musical history the piano was the dominant force, the violin and cello effectively building on its melodic ideas. All that was to change with Beethoven, but even in Haydn’s works the spirit of exploration is making itself felt. In the unusual F sharp minor work, one of three the composer wrote in London in 1794, the ‘new’ can be felt in the strangely elusive mood and the unusual choice of keys that are much less friendly for the string players.

Contrasting with this was the massive String Sextet no.2 of Brahms, its instrumentation condensed by the composer’s friend, fellow-composer Theodore Kirchner. The arrangement had Brahms’ approval, and was made along with an arrangement of the first sextet to open up the music to amateur musicians. However it must have been a difficult beast to master with so much music for three performers! With Brahms having already written three published piano trios, and one unpublished, the need for two more is debatable – but it was interesting to hear it at this concert nonetheless.

The times used relate to the broadcast link above.

This particular trio is surprisingly sombre in its demeanour, and even though the piano looks to explore some brighter passages in the first movement (from 3:36) the minor key harmonic language returns to keep things relatively straight faced. The second movement, marked Adagio cantabile (from 8:22) is a different story. Set in the exotic key of F sharp major, it brings a radiant, singing line to the melody, in music that Haydn also uses as the third movement of one of his ‘London’ symphonies, no.102 in B flat major. For the finale, a kind of minuet (from 12:11), we return to a dissonant and uncertain outlook, still relatively downcast at the end.

The work opens with quite an imposing stance, its first theme given an airy tone by the first violin. This is countered by the cello, with a rich second theme at 21:25. Brahms develops these themes intensively as the movement progresses. Then at around 29:15 the mood becomes much more thoughtful as Brahms recaps the original melodies, and this section leads to a strong, richly coloured close of a really substantial movement (33:16) – at 14:10, longer than the entire Haydn!

The second movement is a Scherzo, and is beautifully scored at the outset by Kirchner, with violin and cello pizzicato (plucking). This slightly furtive section is contrasted by a vigorous trio section (37:05) before the music subsides again to the mood of the opening – though it gathers itself once more at 40:54 to sign off in style.

From 41:35 we move into the slow movement, which is harder to define in the shadowy outlines of the melodies we hear on the stringed instruments. The underlying tension within the music is suddenly released with a quicker section at 44:56, the piano jousting with the strings, before the slow music comes back, more restful this time.

At 50:56 the final movement begins, initially in an outlying harmony but moving to G major where the music can assert itself. The energy gathers from then on, the last few minutes a triumphant assertion of the melodic ideas and the home key, signing off at 57:42.

Thoughts on the concert

Despite a very strong technical performance, it was still quite difficult to warm to Theodore Kirchner’s arrangement of Brahms’s Second Sextet. This was probably because of the knowledge that the glorious colours of the original are to an extent compromised in the arrangement, and that changing from six instruments to three makes the music sound a lot more congested.

With that said the Trio Jean Paul gave an excellent, forthright performance that took Brahms’s challenges head on, and also left room for the shadowy outlines of the third movement – where we did admittedly lose the underlying pulse for a little while. Ulf Schneider’s sweet tone at the opening of the first movement was rather beautiful however, matched in the second theme by cellist Martin Löhr. Pianist Eckhart Heiligers did extremely well with the busy part he was assigned, and the weighty finish to the work was most impressive.

The Haydn felt ‘authentic’ and captured what seems to be an awkwardness on the composer’s part in writing this work, a blend of adventurous harmonic writing and seemingly confused emotions.

You can hear Trio Jean Paul’s recording of both Kirchner arrangements of the Brahms String Sextets on Spotify below:

You may also wish to compare them with the richly scored originals, given here in a new recording by an ensemble including the Capuçon brothers, violinist Renaud and cellist Gautier:

Meanwhile for fans of the Haydn Piano Trios – which make wonderful music to work to – here is a disc the Trio Jean Paul released in 2013, including the works performed in this concert: