One of music’s greatest properties is making its listeners happy – and judging by the audience for the Minnesota Orchestra prom, wreathed in smiles as they left the Royal Albert Hall, this was an objective handsomely achieved by the orchestra and its music director Osmo Vänskä.

Making their first BBC Proms appearance since 2010, they had programmed a concert in honour of Leonard Bernstein the conductor, rather than the composer – but that still meant we got a chance to hear one of his most popular concert showstoppers, the Candide Overture. As a collection of catchy tunes and toe-tapping dance rhythms it is difficult to beat, and Vänskä conducted a performance light on its feet, affectionate and warm – if lacking a little of its composer’s highest spirits. 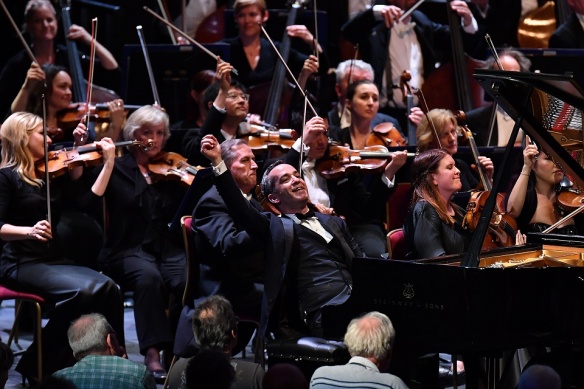 The performance of Gershwin’s Piano Concerto set that to rights. Taking the solo part was Inon Barnatan (above), whose command of the composer’s bluesy melodic style was well-nigh perfect. Gershwin is not thought of as key Vänskä repertoire but he brought to the orchestral passages a level of clarity that brought the streets of 1925 Manhattan into sharp, nocturnal focus. The string sound was exquisite, while the trumpet solo of Manny Laureano in the slow movement was brilliantly affected and played, fully deserving of its cheer at the end.

Barnatan was a box of tricks, at one moment thundering octaves down from on high, while in the other hanging onto the slow notes with great affection, as though unwilling to let them leave. The transparency of Vänskä’s conducting told of the influence Ravel has on some of Gershwin’s writing, but the swagger of the orchestra, leader Erin Keefe practically sitting next to Barnatan in a visual show of unity, was irrepressible. Barnatan gave us a perfectly positioned encore too, Earl Wild’s virtuoso study on I Got Rhythm. 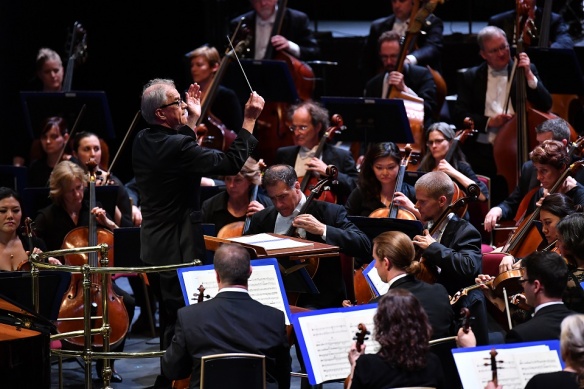 The music of Charles Ives has barely popped its head above the parapet at the Proms, but here was a chance to enjoy a work premiered by Bernstein himself, conducting the New York Philharmonic Orchestra in 1951. It’s fair to say that Vänskä (above) secured a reading with a good deal more sobriety and control than the master might have done, but that’s not to say it was without flair and pure enjoyment.

The Minnesota Orchestra, once again playing with a smile, enjoyed the dense packing together of tunes in the symphony, while the strings dug into the serious first movement, setting out the case of a symphonic argument with impressive gravity. Once again Vänskä ensured they made a beautiful sound, the brass chorales ringing out with great surety, but as the symphony progressed so did the sense of convention edging nearer to the window.

This reaches its height at the climax of the fifth and final movement of course, and like the fast second this was taken at quite a lick, the music careering along as though about to lose its footing. And so it did, the last chord sounding its sharp clashes and some in the audience taken aback by Ives’ unexpected but wholly typical daring. Was it a mistake? Were we heading there all along? Yes and yes – and in that second, as booklet writer Paul Griffiths so aptly put it, ‘’Reveille’ was sounded’.

Yet there was one more surprise. As I write this the Minnesota Orchestra are on their way to South Africa to mark Nelson Mandela’s 100th birthday in a series of high profile concerts. They gave a wonderful send-off, an arrangement of the traditional South Africa song Shosholoza, with the players joined in song as well as with their instruments. It was a joyful revelation, upping the spirits still further – and ensuring we will track their movements in South Africa with great interest.