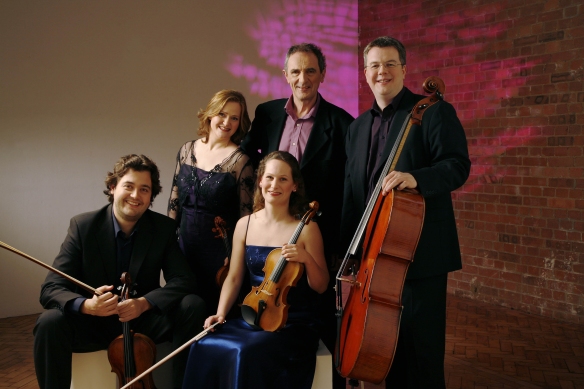 Nash Ensemble (above) [Ian Brown (piano), Stephanie Gonley, Michael Gurevich (violins), David Adams (viola), Adrian Brendel (cello) (N.B. the line-up pictured above is not the same as the one appearing at this concert)

The First World War had a profound effect on composers of classical music. Many of them served or were closely involved with the conflict, and even those who weren’t used their music as a vehicle for the shock and dismay felt at the turn of events.

John Ireland expressed his horror through two chamber works completed in 1917, the Violin Sonata no.2 and the Piano Trio no.2. The latter work began this concert from the Nash Ensemble, part of their War’s Embers series focusing on music written around the War in England. Set in one compact movement, it is a powerfully expressive utterance, even when the music is quiet – as it was when the first cello melody began – to when it reaches peaks of intensity in the march sections, depicting the war itself. Ian Brown, Stephanie Gonley and Adrian Brendel were united in voice, their three instruments often linked in melody, while Brendel’s eloquent solo at the start set the solemn tone.

Stylistically the work draws part of its inspiration from Debussy and Ravel, and these links were nicely played up by the trio, but the opening music dominated to the point of obsession, sweeping all before it. As evidenced in an interview with BBC Radio 3 host Fiona Talkington after the performance, the players had a clear understanding of Ireland’s writing, and his still underrated status in chamber music form.

Ireland’s trio was first heard at the Wigmore Hall in June 1917, and at the same venue nearly two years later audiences heard the premiere of Sir Edward Elgar’s Piano Quintet. Composed in Sussex, this autumnal work, written just prior to the Cello Concerto, reflects a fascination the Elgars held with a group of dead trees in Flexham Park, their branches twisted ‘in an eerie manner’.

The spidery tendrils of the first few bars reflected this eerie vision, and refused to release their grip on the piece despite a first movement that really got into top gear in this performance, passionately played and majestically poised. There was an affecting second theme before we heard for the first time some Spanish rhythms, also inspired by legend around the dead trees and refracted through a prism in Elgar’s mind, strangely sketched but never fully coloured-in.

The relative serenity of the slow movement, was countered by an emotional distance, as though here Elgar was conscious of the War, itself audible to him through the use of artillery just across the Channel. Perhaps because of this the trees made themselves known in closer proximity as the finale began, though here Elgar – and the Nash Ensemble – threw off the shackles to power through to an upward looking conclusion.

This was a fine performance of a work the Nash – and certainly Ian Brown – have had in their repertoire for more than 25 years. Brown displayed a natural instinct with the tricker phrases and was helped by a lovely string tone from the quartet in a performance that made sense of some of Elgar’s more distorted rhythms.

War’s Embers will come to BBC Radio 3 on Tuesday 13 November and I urge you to hear it, placing this elusive work in the context of a fine performance.

You will be able to listen to this concert on BBC Radio 3 on Tuesday 13 November. In the meantime recordings of the works heard are on the Spotify playlist below:

For further information on the Nash Ensemble’s War’s Embers series, visit the diary section on the ensemble’s website