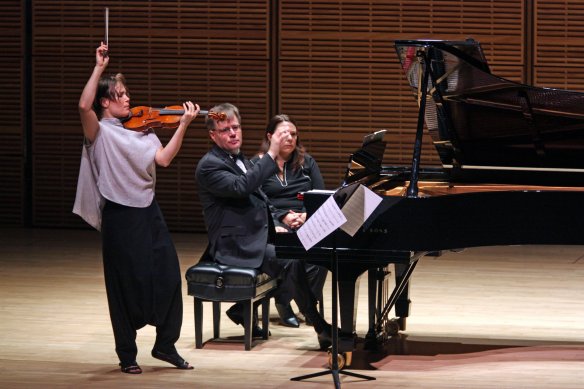 On paper, this was a strange programme for an hour-long lunchtime recital at the Wigmore Hall. Yet that in itself is refreshing. Why should programming have to be conventional and fit a particular blueprint all the time? So while I may not have necessarily warmed to their choices initially, on reflection Leila Josefowicz and John Novacek gave us something different. There was a chance for those attending and listening on BBC Radio 3 to hear two very familiar pieces out of context, complemented by music such as the Zimmermann Violin Sonata that we may not have heard before.

Josefowicz and Novacek begin with a highly charged account of Valse triste (2:10 on the broadcast link), the third number from Sibelius’s Kuolema Suite. This is normally heard in the hands of a string orchestra, but the arrangement here – and the ardour with which Josefowicz plays the violin line – especially when doubled with the piano – brings a striking dimension to the piece.

It would have been lovely to hear Josefowicz and Novacek take on the whole of Prokofiev’s Violin Sonata no.1 in F minor Op.80, for this is a dramatic piece indeed with a chill to its writing that would have matched the weather outside. Sadly the second movement was all we had time for (from 6:45), and it felt disjointed outside of its familiar context, despite the passion invested in it by both performers.

Of far greater meaning was Oliver Knussen’s Reflection (15:17), one of his last completed works. Josefowicz was a close acquaintance of the composer, and he wrote his Violin Concerto of 2002 for her. The Reflection is not necessarily what you would expect, a reminder that not all reflections are calm and reflective. It begins urgently, the violin ascending before being joined by the bell-like sonorities of the piano. Some of the reflections are jagged, and most are urgent – and typically for Knussen there is a great deal of interest in the melodies and textures, a style that is compact and extremely listenable but also forward-looking. It finishes abruptly.

The excellent writer Paul Griffiths clearly had trouble finding any information on arranger Otto Wittenbecher, let alone anything to do with his version of the Adagietto from Mahler’s Symphony no.5. This famous excerpt transfers surprisingly well to the reduced forces here, helped by sumptuous tone and control from Josefowicz, whilst Novacek distils the orchestral parts into something surprisingly manageable. Played with soft affection, the main theme leaves its mark, even though the arrangement is taken at quite a quick pace.

The main work of this recital, Bernd Zimmermann’s Violin Sonata made a strong impact. In three concise movements, it manages to explore the outer realms of twelve tone writing without compromising its composer’s folk-inflected style. From the outset at 34:51 Josefowicz and Novacek carry the urgency of the piece as though it were hot in their hands. The inflections are reminiscent of Bartók but have a more jagged melodic style; the punchy percussive approach from the piano is similar however. The slow movement (39:00), is written in a 12-tone form (that is, each of the 12 pitches has to sound before it can be heard again). It is however surprisingly tonal, with its stress on the pitches of ‘C’ and ‘F sharp’ giving the music a restless base. The nocturnal scene again recalls Bartók but is resolutely Zimmermann’s own, with passionate lines from the violin. The busy third movement (44:07) revisits the mood of the first, with terse but meaningful statements from the duo.

As an encore the duo added Charlie Chaplin’s Smile (50:06) in an initially eerie, high-range arrangement made by Claus Ogermann.

Most of the music in this concert (with the exception of the Knussen) can be heard on the Spotify playlist below:

For further insight into Josefowicz’s clever programming, her disc with Novacek For The End Of Time provides ample evidence, bringing together works by Falla, Messiaen, Grieg and Bartók: