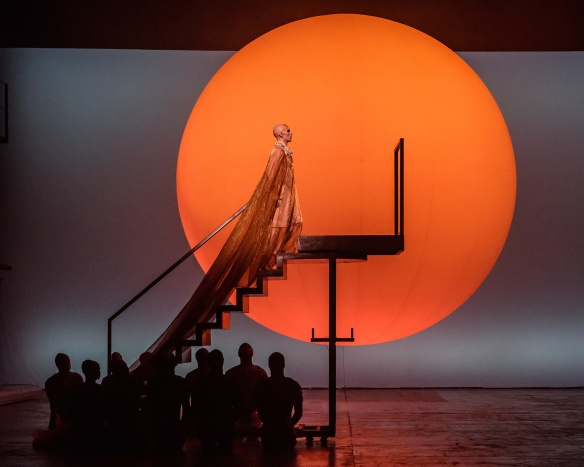 On its second run at the Coliseum, Phelim McDermott’s production of Philip Glass’s third opera Akhnaten looks set to be a sell-out hit this time around too.

That much is clear from the first declamation of Zachary James, the Scribe who provides commentary throughout the opera, describing the rise of the first ‘monotheist’ Pharoah of Egypt – that is, one who looks to believe in just one god.

Immediately the dust and shimmering heat of the Egyptian desert are rendered to the audience, not just through the stunning, scorched-earth stage design but through Glass’s orchestration, dispensing with violins in the orchestra for a leaner, drier sound.

The music is deceptive, and though it may on occasion lack development of its principle ideas it is emotionally substantial and deftly scored. Typically for Glass, the majority of the three acts are rooted in consonant harmonies, and are packed with arpeggiated figures that serve as their melodies. However that is not the full story, for over this base the composer manipulates urgent and sometimes troubling cross rhythms. These are often energetic figures set for the woodwind, and are musical statements that repeatedly ask questions of the plot that by and large are answered.

The ENO orchestra play superbly for Karen Kamensek, operating like the workings of a swan beneath the water line. Meanwhile up above on stage, the singers show superb control and poise, tackling the lengthy phrases with deceptive ease. They are compelling throughout, unwavering in pitch, and are married to arresting images and breathtaking colours. Skills ensemble Gandini Juggling provide mesmeric support, their notable feats of poise and balance given an expressive edge in line with the plot. 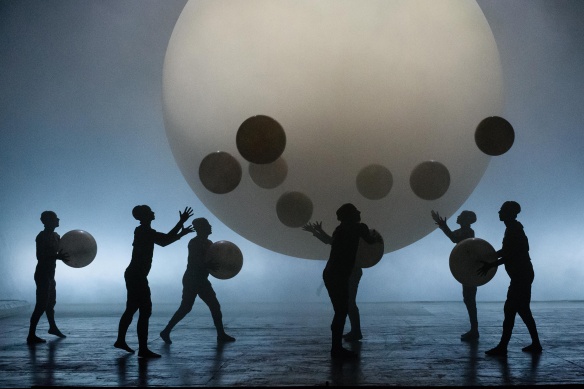 The king Akhnaten himself is sung by countertenor Anthony Roth Costanzo, who is a pure presence, his voice ringing out strongly to all corners of the Coliseum. It dovetails beautifully with the mezzo-soprano of his queen Nefertiti, sung by Katie Stevenson (below). Their slow moving duet in Act 2, where both singers sport vivid red trains, is a treat for the eyes and ears.

Indeed once the audience adjust to the pacing and development of an initially obscure plot, the opera becomes a study in thought. Rebecca Bottone, James Cleverton, Keel Watson and Colin Judson head a very strong supporting cast and sing superbly throughout, while the spoken declarations of Zachary James are especially good, adding real gravitas to the plot. The scenery frequently dazzles while the sun, lauded above all by the Egyptians, dominates proceedings from the back of the stage with reassuring stillness.

After 35 years, Akhnaten continues to provide a standout operatic experience, and dazzled newcomers and returning patrons alike on this occasion, a multi-dimensional treat for those lucky enough to attend. Phelim McDermott and above all Philip Glass have created an experience notable for its achievement in presenting an ancient civilization to the modern world, showing how the human spirit and instinct is essentially unchanged in all its time on earth, both for good and bad.
Go and see it while you have the chance.

There are three more opportunities to see Akhnaten at the Coliseum in London, on Thursday 28 February, Saturday 2 March and Thursday 7 March. For more information head to the ENO website

The only available recording of Akhnaten, made by the original cast and conducted by regular Glass collaborator Dennis Russell Davies, can be heard on Spotify below: