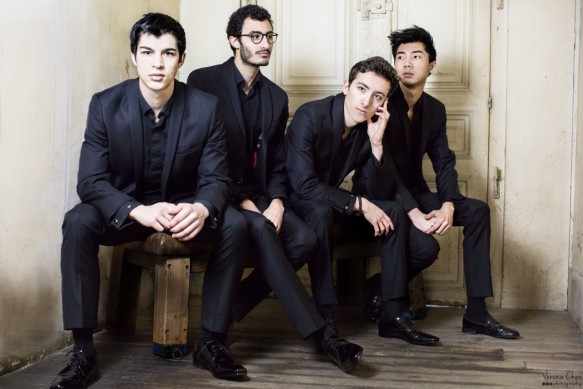 This BBC Radio 3 Lunchtime Concert showed us Mozart young and ‘old’ – that is, a work each from his teenage years and from his fourth decade. It was given by the Quatuor Arod, a French-based quartet on the BBC New Generation Artists scheme, and their ranks were boosted by viola player Timothy Ridout, himself on the YCAT scheme.

The Arod Quartet’s performance of the Divertimento in D major K136 (from 1:46 on the broadcast) shows what a sunny piece of music this is – although it could be argued they take the first movement a bit too fast, perhaps displaying a bit too much nervous energy. Either way they play it very well and with affection, the simple theme carrying a long way.

The second movement, marked Andante (5:57), feels just right, the four parts integrating in a way that brings home the simple pleasures to be taken from playing this music together. The third movement (12:16) scurries out of the blocks with a hint of mischief, the interplay between the four taking on a more competitive edge but with the first violin of Jordan Victoria ultimately triumphant, and technically excellent. 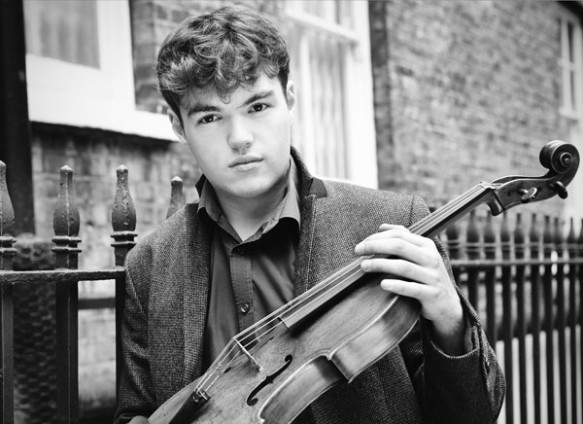 The String Quintet in G minor K516 operates at the other end of the emotional scale, being the dark to the Divertimento’s light for much of its half hour duration. It is a magnificent piece, profound from the very first theme, where first violinist Victoria mastered the longer phrasing and the increased stretch of the melody when the second main theme of the first movement came around. The sound is very different with two violas, and the greater prominence for Mozart’s own instrument seems to have inspired him to write with especially great feeling. This is the second of four mature string quintets (there are two younger works of smaller form), and these are pieces that are substantial in their dimensions, their feeling and also their melodic invention.

While the piece does start in questioning mood (from 17:02), the five players here portrayed its nervousness while bringing shafts of light into the writing. Vibrato was sparingly used if at all, but was a stronger expressive tool as a result. The first movement’s two main themes are strikingly played, its structure clearly mastered, and the overall sound with Ridout’s viola added is very attractive.

The Minuet is normally a light hearted affair in Mozart chamber music, but here was anything but (from 27:31). Any attempts to come up with a lasting tune are broken by the sliced chords of the quintet playing together, so that what aspires to be a charming dance never has a chance to get fully into its rhythm. Some respite comes from the Trio section, where the composer will usually contrast what has gone in the Minuet. Here, from 29:22, Mozart slips from the minor key to the major for the first time, and the tension eases notably – especially in this performance where sunnier thoughts make themselves known for the first time. This, however, is short lived, for the Minuet returns in even sterner form (31:22)

The slow movement Adagio (32:43) is even more alarming than the Minuet. This is an unexpected move, for the music is in E flat major, which normally finds composers writing stronger music, and it requires the players to use their mutes the whole way through. With no vibrato from the Arod the textures are stark and the sounds lean, especially when the quintet breaks into smaller sections as it frequently does. In the middle the clouds darken further as Mozart moves into the distant keys of B flat minor (34:28) and E flat minor (38:07), where the extra viola (Timothy Ridout) makes a personal outcry of pain. There is hope however, the first violin taking us to sunnier climbs before we return to what feels like a stronger repeat of the music from the start of the movement.

The final movement (41:15) keeps the prevailing mood, slow and solemn from the outset – but then moves towards the major key, and finally shifts up a gear at 44:00 with music of much greater optimism. Let off the leash, Jordan Victoria enjoys the effervescent music he now has, and the tunes flow beautifully, the stern music of the first three movements now receding into the memory.

Mozart’s late chamber works contain some of the most rewarding music in all of his output. The four mature String Quintets stand at the peak of his achievements, with the work performed at this concert complemented by three other masterpieces. In their key make-up they match Mozart’s last four symphonies, and these versions by the Grumiaux Trio and guests (on CDs 2 and 3) make for a wholly satisfying listening experience:

The Quatuor Arod are relative newcomers to the recording scene – but their first disc of string quartets by Mendelssohn is a nice departure point from the Mozart played here:

Finally Mozart’s 3 Divertimenti for strings – best heard in their quartet form – give some of the most carefree classical listening you could wish to enjoy. This collection from the Hagen Quartett brings them together with the perennial favourite, Eine Kleine Nachtmusik: